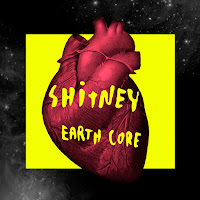 What is Shitney? The female rulers of Sun Ra’s Saturn colony? Rebel refugees from the eighties synth-pop? Goddesses gibberish trash talk? Hyperactive tone geologists that will blow your head while drilling into the core of this planet? Witty feminist criticism of masculine-muscular free jazz? Most likely, all together and much more. When you think that you may grasp what Shitney is all about, Shitney will spin your ears and head again, leaving you dazed and confused, still laughing.

Shitney (you guessed right, originally titled Shitney Spears) brings together three of the finest ladies from the Copenhagen busy alternative and jazz scene, somehow all are on the fringe of musical normality, in their own special ways - Estonian sax player Maria Faust, leader of the groups Jazz Catastrophe and Sacrum Facere, described as one who believed she could one day become Alice Cooper when other girls went all coocoo with boys; Danish keyboards-guitar-electronics player Karine Amsler, from the group Television Pickup, portrayed as one who secretly built her first mini guitar when other girls played with the dolls; and Swedish vocalist Qarin Wikström, from the group Kostcirklen, who wrote her first political song and dressed up as a liquorice candy for her kindergarten party when other girls tried on mom’s high heels.

If there is some justice on this Earth, Shitney should headline festivals near your home.

Earth Core is distributed also in a limited edition, 50 pieces of heart-shaped, pink soaps with a dead wasp inside (with a download code), produced in Estonia. The wasps were hand-collected by the soap producer's family, and Shitney declares that it does know whether if the wasps' stingers were removed not.