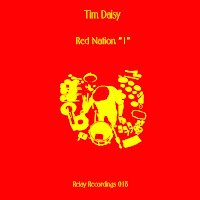 This is not a record for everyone. It is for me. Here’s Tim Daisy sitting in the middle of a percussive circle of absolute joy. On this recording he utilizes radios, turntables, gongs, found objects and his drum kit.

Sometimes two things equal a mere two things. In rare cases, when two things fit together so well, they create a third. A Cappella groups have different names for this but when all the voices mesh perfectly, other voices are created and everyone involved can hear them. They are heard all over this record. With such an array of toys, gadgets, and instruments at his disposal, Daisy has the good sense not to turn this into an over the top spectacle of jazz drumming saturation. Instead, he uses an incredible amount of restraint to produce not only a sometimes somber meditative piece of work but also an amazing addition to the already complex and varied Daisy cannon. Daisy is all over the music from the Chicago area and has strong relationships with the heaviest of hitters in the creative music scene, but this is all Daisy, from the no overdub approach to releasing it on his own label, Relay Recordings.

Red Nation “1” has, within this unique framework, two distinct sides. Tracks like 'Shadows Play', 'The Drunken Captain', and my personal favourite, 'Beats for an Owl', have Daisy sitting behind a traditional drum kit, playing duets with loops, noises, bells, and scratches. The other side of the recording with tracks like 'East of Appalachia', 'Concord Citizen', and the amazing Indonesian inspired 'Chant', take him away from the drums and places him within the repetition of the loops using other found items and percussion, creating an intensity that he manages to maintain with very few sources of sound. They are just well placed and perfectly timed. 'Yazoo', for example, embodies this notion.

Daisy also knows when to stop, with is one of the hardest things for an artist to learn. Again, Daisy is on point as the album clocks in at 34 minutes, which is just enough time to soak in the textures and listen to all the ghost voices he creates ( Did you hear that? What is making that sound?) while at the same time creating a need to listen to the whole thing over again.

Not a track from the album, but a great look at the approach to this recording: