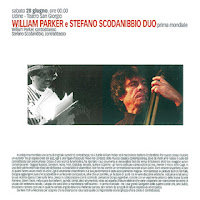 I imagine that most of the readers of this blog are familiar with William Parker, so let me introduce you to Stefano Scodanibbio. Scodanibbio (1956-2012) was an Italian bass player of the highest order. A frequent collaborator of composers like Luigi Nono and Giacinto Scelsi, he also commissioned many new works for bass from Bryan Ferneyhough, Fred Frith, Iannis Xenakis, and many other composers. His long discography includes sessions with Terry Riley, Thollem McDonas, the Arditti Quartet, and many more released through labels like ECM, Wergo, New Albion, and others. After his passing a memorial album, Thinking of Stefano Scodanibbio, was released and features performances from many great bass players like Mark Dresser, Joelle Leandre, Barry Guy, and Dieter Manderscheid.

Bass Duo is five tracks spread across sixty-three minutes, recorded live in Undine, Italy in 2006. The music is deeply riveting. My first spin of the album found me transfixed in front of my speakers, rooted deeply to the floor. The second listen, through good headphones, left my mind reeling. The duo unleashes such an unrelenting mass of sound, it’s hard to comprehend that it’s just two men playing together for the first, and only, time. When the grooves do appear, they sit in a pocket deeper than the Grand Canyon. Parker and Scodanibbio have both worked across many musical traditions. Their ability to play in and around these traditions combined with their unending creativity make for a wonderful album. As Mark Dresser puts it in the liner notes “both bassists have singular languages, they also have in common an understanding of musical function – utilizing sound, space, melodicism, pulse, harmonic underpinning, extended techniques, and pedal points to create states of multiplicity.”

I know this album isn’t going to sell many copies. Improvised music is hard enough to sell and bass duos are doubly hard, so thank to Aum Fidelity for making this important document available.