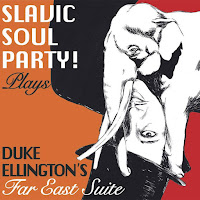 For Duke Ellington aficionados, and indeed for jazz fans in general, it’s likely that the Far East Suite occupies a special place in one’s collection. It’s a masterpiece of modern jazz by any standard, and especially remarkable given that Ellington was in his late 60s when he and Billy Strayhorn composed most of the music on the record, soon after a 1963 U.S. State Department-sponsored tour by the Ellington Orchestra of a variety of countries in the Middle East and South Asia (but alas, no stops in the far East; in that sense the album is misnamed. And that’s probably its only flaw, really). Not only is it an expertly constructed album, thematically and musically, it contains some of the finest compositions in the Ellington/Strayhorn repertoire, including the unbelievably gorgeous “Isfahan” and the subtly beautiful “Mount Harissa,” not to mention the stunning big-band power of “Ad Lib on Nippon.” So anyone audacious enough to record a song-by-song remake of that iconic record better know what they’re getting into.

Enter the Slavic Soul Party. Bringing its unique flavor of Balkan-inspired jazz to the proceedings, in some ways it’s the perfect vehicle for tackling this kind of project, adding yet another layer of cross-cultural fertilization to music that is already culturally multidimensional. All nine cuts from the original record are presented here, in sequence, by a crew including: John Carlson and Kenny Warren (trumpets), Peter Hess (saxophone/clarinet), Peter Stan (accordion), Matt Musselman and Tim Vaughn (trombones), Ron Caswell (tuba), Chris Stromquist (snare/percussion), and Matt Moran (tapan/goč/bubanj). Right away, one notices the relatively diminutive size of the band: whereas Ellington’s group on the original release included 15 members, with a full rhythm section (including Ellington, of course), the Slavic Soul Party has to make do with only nine musicians (including just one saxophone), and the absence of a piano and bass player. And this is important, since of course the greatness of Ellington’s music resided not only in the charm of his melodies, but also the grandeur of the arrangements themselves, which were always astonishingly rich and complex. With fewer horns there’s only so much that can be done to capture the music’s full beauty and power. So Moran, the principal arranger for the group, decided not to aim for imitation, instead choosing judiciously to reinvent the pieces in the spirit of the Eastern European vibe the group is known for. Using Ron Caswell on tuba for the low end and Peter Stan’s accordion for the chordal instrument helped compensate for the loss of the bass and piano, and the group relies heavily on its own infectious rhythms to carry the pieces along. The result is some really enjoyable music, even if Ellington purists may quibble a bit with particulars that go missing. (Just to take one example: no, there’s no one to approximate Johnny Hodges’s alto on “Isfahan” – although either Carlson or Warren does a pretty respectable job of it on trumpet.)

Of course, one of the main advantages to avoiding the route of simply re-creating the originals is that the band can take some chances, thereby pushing the music in new directions. “Blue Pepper,” which uses a straight rock rhythm on the original, is here converted into a grooving Balkan shuffle; “Depk” gets around the absence of piano by turning things over to Stan, who is an outstandingly agile presence on the accordion throughout the record (and who embodies the Eastern European sound much better than a piano would anyway); and Moran’s skilled playing of the tapan and other traditional Serbian percussion instruments keeps the beat moving even in the absence of a conventional rhythm section.

Importantly, the music was recorded live at Barbès in Brooklyn in 2014. The joyous and boisterous crowd is clearly having a blast, as they should, as this a whole lot of fun.
Paul on Tuesday, April 11, 2017
Share