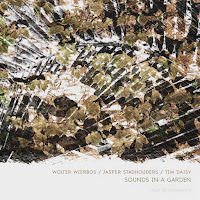 Wolter Wierbos, Dutch trombonist, is a multi-disciplined artist to say the least. He has ventured into dance, film, television and theatre and has played on hundreds of albums with more familiar names than I could possibly list here and amazingly, this worldly experience can be forced through a bell of a trombone.

Jasper Stadhouders, electric guitar and bass, who along with Tim Daisy (drums) have had a chance to musically bond during their recent Made to Break time together round out this trio that bursts with ideas, sounds, and drama.

The recording is bookended with an opening statement and a closing statement; 'Finding Things' and 'Pelvis to Snare' respectively, with the real substance exploding within the three longer tracks in between. 'Happy to Play', gives those who may not be too familiar with the work and sound of Wierbos, (me) a chance to hear the world as he does. He goes from melancholy to the sounds of choking to death in a matter of moments. So far the soundtrack to this garden is great but i’m not sure if I want to visit. Wierbos steps away throughout but is never truly gone. Daisy switches to brushes and Stadhouder electronically manipulates the air trapped in my headphones. Daisy cannot only lead a band, he also knows how to stay impossibly creative while letting the others extend their technique.

'Loose Cannon', leaves little time to get adjusted before all three players forcefully interpret what a loose cannon is. This track being over twenty-two and a half minutes, it leaves plenty of time to have monumental breakdowns between various duo settings before the reconstruction. Here is a good a time as any to just say how much fun this is. This track really has everything while giving you the best of each of the players.

'The Grizzly Purr' creates a tense and anxious mood as each musician slowly adds idea over idea until the track has created its own ecosystem inhabited by all sorts of wildlife. Just eight minutes in 'The Grizzly Purr' revisits where it started but yet slightly more ominous.

An album worth repeated listens, this will be spun on my commute for days to come while keeping me dreaming of this secret garden and the sounds that it makes over the concrete i’ll be driving on. Closing statement, turn of the key, I’ve arrived.