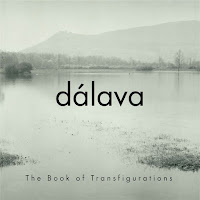 The core of the group Dálava is the husband and wife team of vocalist Julia Úlehla and guitarist Aram Bajakian. They released the first Dálava album in 2014 and like The Book of Transfigurations, it is an exploration of Moravian folk songs collected by Úlehla’s great-grandfather, sung in Czech, and set to the more contemporary downtown NYC sound cultivated by Bajakian. The care and concern put into crafting the music, stemming from Úlehla family roots, plus the adventurous compositions from Bajakian (who worked with Lou Reed, the rambunctious group Abraxas, as well as created the meditative Dolphy Formations) make for a potent combo.

Let's jump right in on track three, 'Dyž sem já šel pres hory / The rocks began to crumble'. The words, translated are of a young man’s heartbreak, being torn away from the woman he want’s to marry because he’s being drafted to war …

Get married my girl, my golden heart,
I am not allowed to take a wife
I received a note, a little note, note
I must go to war.

Úlehla’s voice is haunting, there is a compressed urgency and a folksiness that doesn’t quite settle into, or leave, your ears. Bajakian delivers slashing guitar work that captures the internal tearing apart by conflicting romantic and patriotic loves. On the next track, 'Co ste si mamičko za dům stavjat dali / Iron bars, iron lock’, Úlehla’s voice is front an center, while an accordion provides appropriately forlorn accompaniment:

What kind of a house did you build for yourself, mama
Neither windows nor doors, only walls

On a later track, 'Okolo Hradišča voděnka teče / He's bringing something for me’, the music swells from quiet reflection into a wrenching explosion of sound. Such contrasts of old and new, and stylistic juxtapositions make the album compelling, while the language leaves many listeners simply hanging onto the expressive emotion of Úlehla’s voice rather than the meaning - the translations, invoking timeless themes, are provided within the accompanying booklet.

The Dálava band is comprised of Vancouver musicians: cellist Peggy Lee, bassist Colin Cowan, accordionist/keyboardist Tyson Naylor, and drummer Dylan van der Schyff. This isn’t the group that recorded the first album, which was drawn from the guitarists New York City groups. Bajakian and Úlehla have been living in BC for the past several years. While the downtown vibe was mentioned earlier, it is a not omnipresent, rather a calm, assured, expressiveness permeates the album. Check it out - listen closely and let time collapse around you.