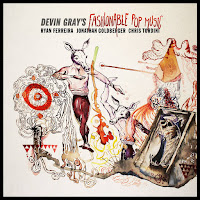 Drummer Devin Gray's quartet with guitarists Ryan Ferrier and Jonathan Goldberger, and bassist Chris Tordini is a potent post-rock explosion - at least that how it begins.

The two guitarists twist distorted sounds around like they are sculpting with sheet metal. Legato melodies are stretched over the sharp angles and effect laden structure of 'Antiplutocracy'. As the long form improvisation unfolds, the electric guitars and acoustic drums and bass mix with the electronics in a textural and exciting way. The drums lead for the first half of the 20-minute track, guiding the hands of the artists as they twist the sounds into new shapes. Then, it stops. A few rattles of the drumsticks and a gathering of thoughts ensures, then the sound of electric guitar with a good deal of crunch begins to cut a meandering path. The music builds up a dramatic and ambient hellscape (I mean that in a good way) as it builds to the much anticipated climax.

The other track 'Sowieso' means 'anyhow' in German, but more importantly it is the name of a sehr wichtig venue for improvisational music in Berlin. The track starts quietly with blips of electric guitar and some percussive chatter. Tordini does a walk on the bass and the acoustic/electric sounds slowly hush from an acoustic clatter to an ambient silence. The small sounds are eventually met with a driving rock beat and some straight ahead instrumental rock improvisation that would sound out of place on a Nels Cline Singers epic, with Goldberg and Ferrier trading sonic swaths. The last third of the track finds the group dissipating into the ambient again, having had made their point.

This album reminds me of some of the music that the blog turned me on to a while back, like that great first Lawnmower album. I regret that somehow this excellent album languished on my iPod for such a long time. It came out about a year ago and I've listened to it repeatedly since, and suspect I will continue to do so for the foreseeable future. Yeah, totally recommended.