Jack Wright's The Free Musics has really fired up the collective! Today we have two differing opinions from Rick Joines and Martin Schray ... 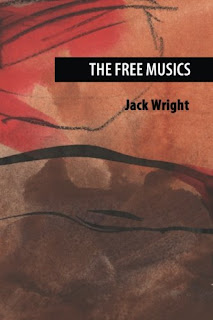 On Jack Wright’s The Free Musics

The thesis of Jack Wright’s The Free Musics could be summarized in the immortal words of Groucho Marx: “Whatever it is, I’m against it. . . . And even when you've changed it or condensed it, I'm against it!” But Groucho is not the Marxist who is the presiding spirit informing Wright’s free improvisatory meditation on the problem of “free” jazz; that is Theodor Adorno.

Like Adorno writing about Schoenberg, Webern, and Berg, Wright analyzes the social function of music, the financial predicament of the artist, and the dominant musical ideology that only rewards conformity. Both the “new music” of the Second Viennese School and “free” jazz confront an audience that believes itself sophisticated and open to “the new” but who cannot, or will not, recognize what they were hearing as “music.” Such audiences grow hostile when the artist refuses to bow to the dogma that “the customer is always right.” They expect musicians to abjure their identities as artists and be, instead, “entertainers,” “content providers” who supply what the audience demands.

Jazz, Wright argues, is a rule-bound social and economic activity encompassed within a genre that patrols the borders and decides who’s in or out. As a marketable commodity, jazz is capable of infinite reproduction and is a skill a tradesman can learn to replicate with assembly-line, machine-like accuracy. The jazz performer subjects himself to and obeys the rules of playing the changes and improvising on the theme for a prescribed number of bars. The audience obeys the rules of the consumer or concert-goer and expects to be served a dish they have liked before. Audiences, the music industry, and the teaching of jazz in schools and universities police jazz, making sure it will never turn outlaw. But if it does, it wouldn’t matter because there would be no one to hear it, buy it, purchase a ticket for it, or publish a textbook to promulgate it.

Improvisatory free playing, however, refuses to play nicely with what is hegemonic. Though it, too, can be congealed as a commodity one can purchase, collect, or download, it will never be background music at the Waffle House or at a bourgie cocktail party. Neither will it be a luxury item for display at the Lincoln Center. Free music attempts, persistently, to break rules, even if those violations could eventually become a generic commodity—even if this task turns out absurdly Sisyphean. Rebellion gets sold as just another commodity, a lifestyle choice, personal style. In postmodernity, Wright notes, “the individual is freed from the need to put together a self that can sustain itself in the midst of change.” We are set to “random shuffle.” We pull on our Che Guavara T-shirt, pop in our earbuds, and fashion ourselves after the image of your own personally-chosen brand-name commodities. As Adorno says, enjoy your “prescribed fun.”

An oversimplification of Wright’s (and Adorno’s) argument, might be: if people like it, it cannot be any good: it cannot be “art” because “art” offends the many. Art is difficult, and the ruling ideology cannot account for it. But what happens to jazz-as-art in a tolerant postmodern capitalist democracy—where all things are permitted? when everyone has a right to his or her own taste? when the notion of hierarchy or greatness is rejected matter-of-factly at the cash register, or the ticket booth? How do you offend an audience with no values, who is, therefore, incapable of being offended? And how entice it?

Even if we are all trapped within the horizon of late capitalism, Wright believes some freedom was and is still possible in an almost alternate reality of free music, but only for those willing to sacrifice the recognition culture can give (money, prizes, fame, fortune, to be sampled by Kanye).

Who are you playing for, Wright asks?
Hardly anyone.
Why do it?
I must.

Like Schoenberg’s short-lived Society for the Private Performance of Music (1918-1922), free music, Wright argues, exists as a “virtually private music,” with few financial rewards. The artists play before small audiences or perhaps only to a community of other players. There has always been something spiritual in free jazz—a substitute sacredness, a transcendence visible in the distance, a liturgical expansion of time and compression of space, an almost-forgotten sense of utopian hope. There may be moments when the ruling tradition and its audience-as-police-force can be forgotten, but perhaps only for the artist and his auditor during the time of playing freely.

For me, Wright places a little too much emphasis on the romance of free playing, comparing it to the imaginative play of children who compose pleasure out of what presents itself. “Free playing,” he writes, “is the pursuit of pleasure through making sound that is as truly one’s own making in that moment as possible. This makes it distinct from audience interest and from structures culturally known or self-prepared.” The pleasure—the jouissance—of this art is for him “a way of knowing through our sensuous activity, which resists conclusive understanding and is unending.” But is this the idea held by all artists who play freely, or by the audience who recognizes the beauty of their art? For some, free jazz is more intellectual than emotional, more about transcending technique than emotional enthusiasm.

At other points, however, Wright seems right on the nose: “This ‘outside music’ requires a psyche outside that built for sophisticated adaptation, outside of consumer behavior and the contract with culture suppliers.” For this psyche, the music is not a matter of taste. It calls to them, and through it they see who they are. A Marxist Wright does not name, Louis Althusser, calls this process “interpellation.” The audience Wright and Adorno scorns is interpellated by—hailed by—the ideology of easily commodified forms of mass entertainment, and even “high” art if it has a forbidding price tag. It allows them to conform to what is acceptable to the bourgeoisie yet believe their choice of mass-produced commodities really is a “choice,” and their “unique” combos make them “individuals.” They are “subjects” who cannot conceive of any alternatives to the reality they dream in as consumers. They have what they call “good taste.”

Maybe free jazz is just another commodity, and those who love it are as deluded consumers as everyone else. Yet what is “obvious” or “natural” to the many seems ridiculous or tawdry to the devotees of free music. The free jazz musician and the adherent of the music may never fully escape the repressive quality of the dominant culture’s consumerist ideology, but they respond to a different call to which many are deaf or hostile. Maybe everything is, in the end, a swallowed up in the maw of culture, but their values are the values of the Other, which can never be incorporated into the hegemonic body. They love that which never existed until this moment. They love what disappears the next. They love what could never be repeated. Whatever it is, they’re against it.
Paul on Sunday, May 28, 2017
Share