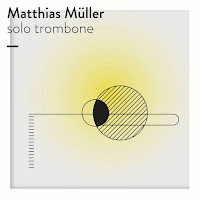 In his book Into the Maelstrom David Toop claims that there is no solo. "Every sound meets the flaring acoustic space, encounters its own shadow in the higher-pitched resonation of electronic feedback, communes with ensembles of the multiple self, doubles back into its own maker even in the moment of its emergence, cries out to the listener who is performer and the hypothetical listener, the invisible ear which will at some point absorb and decipher the mystery, the arresting physicality, of these concise but strange communications."

In spite of Toop’s statement, Matthias Müller calls Solo Trombone his first official solo album. Like many solo albums Müller’s performance is an oscillation between his band efforts (e.g. with Foils Quartet) and the evolution of his very own introspective vocabulary. Here he crosses different borders than with his groups and tries to map territories he hasn’t been before in these environments. Particularly with his use of extended playing techniques he has developed a spare yet eloquent language.

Müller transforms the fragility and vulnerability of the solo situation into excitement. "Bell", the first piece, is an exposure of pure trombone sound in all its varieties, there is no electronic manipulation. However, Müller does alienate his lines, he delves in hissing, spitting, agonizing, squeaking and he implements the sound explorations he’s developed with his trios Trigger and their performances in show-caves and their surroundings. No traditional trombone sound is audible, only in the last four minutes of the 17-minute track Müller switches to circular breathing and throws in a funky riff he playfully dances around.

Moreover, Solo Trombone is also Müller’s way back to the roots. The album was recorded at St. Lambertus Church in the small village of Kirchtimke, located between Bremen and Hamburg, where Müller comes from and where he learned to play the trombone. "Valve" the second piece, symbolizes this way back, he pays tribute to Johannes Bauer (with whom he played in the Posaunenglanzterzett). Recorded only three months after his death Müller uses lines Bauer could have played, as if it was a last sad reference to the great German trombonist.

In the closing track, "Slide", Müller combines the two different approaches from the aforementioned pieces, sound in all possible varieties disperses in the church. Short shots ricochet through the room, answered by mournful groans. Listening to this piece, David Toop has a point. Müller is in a permanent dialogue with his instrument, he absorbs the atmosphere and vice versa, he listens and responds.

Is this a solo album? Who cares if the music is that good.

You can listen to an excerpt of“Valve“ and buy the album here: