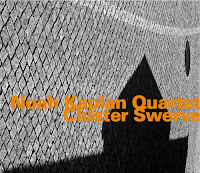 Shapeshifter Lab, tucked away in the Gowanus section of Brooklyn, is an impressive 4,200 square foot venue. The stage area alone is the size of most venues catering to experimental music. The area is gentrifying quickly - in the few years I've been attending more and more bars and coffee shops have been opening up and I am pretty sure there was some sort of dance party happening at a self-storage place along the canal.

I arrived at the same time as the Noah Kaplan Quartet. Kaplan, who lives nearby and studies composition at Princeton University, just released his second recording for HatHut records, Cluster Swerve. This was the release show. The rest of his long standing quartet, guitarist Joe Morris, bassist Giacomo Merega, and drummer Jason Nazary, were now at the small bar outside the music area, getting our hands stamped and what not.

I grabbed a drink, found a good vantage spot, and watched as the group set up as a small crowd filtered in. The group was relaxed though the leader paced about a bit - Morris and Merega sat opposite each other with Nazary recessed between them. Kaplan took a spot center left and began to play. His sound was tempered, soft but not smooth, with a pensive and somewhat vulnerable tone. Morris joined next, throwing out a mix of chords and legato phrases. Nazary then introduced some electronic textures, a crackly fizz, to the atmosphere and Merega started to lay some foundation. The drummer picked up his sticks, a propulsive pulse gripped the group.

As Kaplan picked up the pace, his dark tone filled in the remaining space between his taut microtonal phrases. Moving in a blur of melody and motion, he pushed the sound further and further. Morris jumped in as Kaplan dropped out, beginning with spaciously articulated notes before ramping up the speed and density. Merega responded with with a punchy walk, while Nazary kept up the pace. Coming down from a early peak, Morris and Kaplan engaged in a quiet, but tense duet, the electronics (perhaps a bit too loud, but not overpowering) provided a cushion of sound while Merega shifted the slabs of bass about.

Kaplan's music is an intriguing mix of classic free jazz with bits of rock, sometimes ethereal, sometimes driving. The breadth of musical elements and contrasting styles - moments of intense groove, musical searching, and then enthralling peaks - kept it compelling from start to finish. All but one song that night was improvised (an utterly transformed version of 'Stella by Starlight') and there was nary a dull moment.

On Cluster Swerve, it is obvious that the spirit on display at the show was not a one time event. The album opens with 'Clinamen', the historic name given to the swerving motion of atoms, and in this case, perhaps its also related to the unusual movement of the melody. Kaplan utilizes to great effect the aforementioned clustered notes, craftily swerving around the pulse and accompaniment. The second track 'Entzauberung' - the German word for disenchantment, is actually quite energizing. There is a fascinating passage where the electronics and drums blend into a thick sonic texture, and the song builds to a climax that is not unlike the concert experience - an intensity grips and holds the listener close, until it finally decides to let go.

The version of 'Body and Soul' on the album is like the experience of hearing 'Stella by Starlight' at the concert - unless paying close attention it is easy to get lost in the music without realizing you've heard it so many times before. The kinetic swirling of sound the group achieves on the fourth track, 'Sphex', is the best example of the group's power. The full effect of the kinetic bunching of phrases from both Kaplan and Morris is felt as they reach a fevered pitch. In support, Merega's plays in strong parallel with Morris, at once reactive to his musical directions and at the same time quite independent. Sometimes silent, other time upfront, Nazary's playing is strong throughout, whether reacting to the or helping wind things down with a more straight ahead beat like a the end of 'Virago'.

Check out the Noah Kaplan Quartet. Cluster Swerve captures an exciting group for whom form, melody, and contrast are never neglected, and any given approach seems to last the right amount of time, leaving the listener both satisfied and maybe wanting just a little more.


Here's an older video of the group at work: