Peter Brötzmann's duos with American pedal steel guitarist Heather Leigh and Norwegian drummer Paal Nilssen-Love seem to be his favorite ones in recent years. The recent live recordings of these duos capture the deep connection Brötzmann's has with both Leigh and Nilssen-Love. I was fortunate enough to experience both performances in real-time and these recordings add more insights to these experiences. 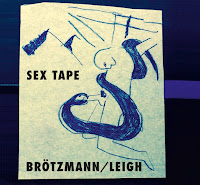 From the first second of this performance, on the last and third night of the Unlimited Music festival in Wels, Austria, on November, 13th, 2016, it was clear that the duo of Brötzmann and Leigh stages some kind of a love story. The energy and the dynamics hinted that something primal, sensual connects these unique personalities. This insight was reaffirmed few months later when the explicit artwork for this album, prepared by Brötzmann, surfaced. This artwork echoes and twists a formative biblical myth, with the make-no-nonsense title that shouts it out even louder.

Well, Brötzmann was never shy how his music and art at all radiates his sexuality. Go and listen to his sextet playing Nipples (originally released on 1969, re-released by Trost sister-label Cien Fuegos, 2015) or Balls (originally released by FMP on 1970, re-released by Cien Fuegos on 2011), or check the poster he did for the Unlimited Festival that he curated in 2011 (captured on the 5-discs box Long Story Short, Trost, 2013).

Sex Tape is only the sophomore release of Brötzmann and Leigh, recorded in the middle of a European tour, following Ears Are Filled With Wonder (Not Two/Trost, 2016). However, this duo had already established itself as one of the main outfits of Brötzmann. Brötzmann and Leigh recorded recently another studio album that is about to be released later this year.

The live recording sounds now as a restless ritual of heavy - sonic - petting. Brötzmann begins with a typical muscular roar but Leigh is far from impressed by his manly call. Her sharp metallic lines force him to change his tactics, seducing him to play in her own game, a slow and noisy psychedelic drone. For a while, he enjoys this mischief. Still, the old lion has few more tricks up his sleeve and he knows how to swing Leigh to some fiery, cathartic climaxes. She jumps head-on, but soon she surprises him with soft, repetitive patterns of courting sounds, answered immediately with surprising emotional melodies by Brötzmann, who plays now on the tarogato. The peaceful, intimate dynamics do not last long before Brötzmann and Leigh resume another explosive confrontation, pushing each other to extreme, ecstatic terrains, eventually drowning in Leigh feedback-laden, metallic storm. Again, after exhausting themselves, both opt for more introspective and emotionally touching interplay that offers Brötzmann most vulnerable and gentle side. Finally, this emotional pendulum concludes when these tough-minded improvisers making peace, in their own proud and most intense terms, by no means surrender to each other but totally fascinated by this mysterious sex thing. 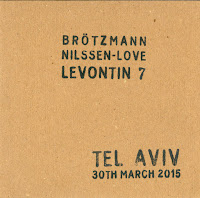 If Sex Tape showed the improvising wisdom of Brötzmann in a free-improvised setting, then this documented meeting with Nilssen-Love owes more to their free jazz backgrounds. Brötzmann and Nilssen-Love play regularly during the last decade, beginning in the Chicago Tentet and instantly continuing in different formats, trios - with fellow reeds player Mats Gustafsson, koto player Michiyo Yagi, cellist Fred Lonberg-Holm, electric bass player Massimo Pupillo and trombonist Steve Swell - and the Hairy Bones quartet, but always returning to the duo format. This live recording from the Israeli, Tel Aviv based Levontin 7 club is their third duo recording, released by Nilssen-Love's mysterious no-label, in a cardboard sleeve designed by Brötzmann.

Both looked quite exhausted before the performance began, taxed by tiresome flights and endless touring schedule, but nothing of this affected their on-stage stamina. Brötzmann began with an intense, wild attack, that was organically yoked to fast-changing, hard-driving rhythmic patterns of Nilssen-Love. Their level of communication was so natural, immediate and profound that no more than a millisecond was needed to shift their rhythmic focus to a different dynamics. The real magic happened when both moved from free jazz whirlwinds to freer terrains, sketching more emotional, lyrical textures. Nilssen-Love alternated between light African polyrhythms and sparser coloring using different cymbals and metal objects, enabling Brötzmann to charge this interplay with beautiful, lyrical melodies, still blended with deep intense shades. Wisely they kept structuring together a multifaceted, nuanced texture, a kinetic architecture that has muscular, tough foundations but its higher, heavenly outlines have some kind of liquid-compassionate qualities. I could have listened to them playing love for hours if not days, but hey had to catch early morning flights.