Here is plan: I'm attending as much as the 22nd annual Vision Festival as I can this year. In past years I have attended one or two nights, making tough choices on which night to attend. This time around, caution is thrown to the wind and the deciding factor will be just how late I can stand getting home. I also plan to write up what I just heard and saw on my train ride home, posting it the following morning. Let's see how it goes... here is day 1:

The Vision Festival, one of the largest Free Jazz Festivals in the US, kicked off with a series of films and talks on Sunday May 28th. Unable to attend, the 29th served as my official opening, however, I got the sense that this really was the beginning for everyone. Spirits were high, from the cavernous main space in the West Village's Judson Church's main hall to the bustling community room where volunteers were selling plates of food (I couldn't quite tell what it was, the signage read 'small, medium, large,' but it smelled excellent), drinks, soaps, t-shirts, photos, books, records, and CDs (and tapes too!). Folks who may see each other only every year at the festival greeted each other, enthusiasts gathered at the tables of their favorite free jazz labels (ESP-DISC, PI, Aum Fidelity, Rogue Art, etc.), and musicians mingled throughout.

Up in the  main hall, at 6:30 p.m. sharp, the Opening Invocation began. William Parker, bassist, composer, co-organizer of the festival with his wife Patrica Nicholson, along with percussionist Hamid Drake, kicked off the musical part of the festival with trumpet and a gong. It started solemnly, and Nicholson approached the stage from the audience, slowly and gracefully moving down the center aisle. As she approached the stage, Parker and Drake picked up the intensity. After a while, Parker put down the trumpet and grabbed his Gimbri (a three string Moroccon bass) while Drake picked up a large hand drum and a hypnotic groove took hold. Nicholson picked up a mic and began saying  (I paraphrase) "we would be nowhere if not for those who came before us, who laid the path", which led to a call to arms in these currently politically charged and unusual times, "the times are needing us, needing you, so we call on you ... calling all visions."

Now begun, the festival swung into gear as Nicholson announced that the night was the celebration of living legends, giving a shout out to bassist Henry Grimes (who was celebrated last year) and this year's Lifetime Achievement awardee, multi-instrumentalist Cooper-Moore.

The first musical act was "In Order to Survive", a group first assembled in 1994 with William Parker (bass), Rob Brown (also sax), and Hamid Drake (drums). For the occasion the group was playing all new music composed by Cooper-Moore. The first song "Welcome" got off to a fun and rollicking start. Completely accessible, it was in a sense tongue-and-cheek in its cuteness, though nicely arranged, as the song progressed polyrhythms crept in and Brown's solo started moving further and further out. The true menace of the song - and I say that with absolute glee - really began kicking in about a third of the way into the piece. While the bass remained a center of calm in the brewing tempest, Cooper-Moore's playing grew less restrained and the piano rocked under his attack and occasional press of the elbow into the keys. The second to last tune, which may or may not have been called "Vision 1" or "Vision 2" was a truly remarkable piece, an emotional highlight for a night that had just begun. Cooper-Moore turned in a heartfelt, earnest hope-tinged solo and when the group finally joined, the audience couldn't help but to applaud what they had just experienced. After the group entered the room, re-arranged the furniture, and proceeded to strip the musical paint off the walls with their playing, the applause was intense. The group reached a rare level where the song is no longer coming out of the instruments but from their whole being. The set wrapped with a song possibly titled "Jack Spratt" which kicked off a little banter between Cooper-Moore and his long time associate Parker.

After a brief pause, Cooper-Moore's group the Digital Primitives took the stage. The set began with Cooper-Moore, who is a wonderful story-teller, reading Ellington and Gerald, a story by writer Kurt Gottschalk. 'The Story of a Piano-Playing Duck and an Elephant Who Liked to Sing' had the audience's attention and can been read here on Cooper-Moore's website. The playful story, however, was quite the contrast to the rest of the Digital Primitives set. In this group, Cooper-Moore relies on the instruments that he builds. He began on the 'Diddly-Bow', which is a stringed instrument that lies flat on the lap and is played with a single mallet. The sound is a mix between a bass drum and double bass, and Cooper-Moore uses it to create a deep rich soul-rattling sound. With drummer Chad Taylor, saxophonist Assif Tsahar, and guest saxophonist Brian Price, the group delivered something that skipped the head-nodding and went straight to heaving shoulders and vibrating torsos. The two saxophonists had contrasting approaches, which lent some additional energy to the already uptempo music. Cooper-Moore, ever restless on the stage, switched to a piccolo and flipped the sound entirely from a bass heavy affair to a light pulsating groove. Switching between woodwind and a percussive clatter of sticks, Cooper-Moore seemed to be telling his young colleagues to kick it up a notch, egging them on to keep up with him. There was an undeniable energy coming off the stage, and as Tsahar reached a point where he could go no further, the song was brought to an end. Next, Cooper-Moore brought out the mouth bow, a single stringed instrument that is bowed and whose tone could be modified by mouth. Taylor turned to a plucked chime instrument and with Cooper-Moore played a gentle repetitive musical sigh, clearering the deck for the final tune. Picking up a banjo-like instrument, Cooper-Moore chided the audience, telling them to turn down their hearing aids, and proceeded to sound a hell of lot more like Bill Laswell than Tony Trischka. Digging into not so much a groove as a rhythmic valley, and channeling Material as well as The Thing, the Digital Primitives took a turn to metal jazz. The set ended with a chant, "We're so happy, happy to be alive". Singing and jumping on the stage, Cooper-Moore - a spritely 70 years old - certainly seemed to prove that age in only in the mind.

After the set, Nicholson acknowledged Cooper-Moore's Lifetime Achievement with a short speech and a presentation of a poster by artist Jeff Schlanger. "Cooper-Moore is profoundly himself," said Nicholson, "every time he plays, he makes it count, it's not a profession, it's a gift" (to which Cooper-Moore shouted out something to the effect of "if it was a profession, I'd make money"). The air of familiarity hung about, and there was great comfort and humor as the years of collaboration and cooperation showed through.

Following the award, poet Carl Hancock Rux along with laptop DJ Hamilton Kirby entertained the audience by creating an atmosphere of incidental sounds and words. His voice deep and rich, Rux read from his book and had the audience enthralled. Then, taking the stage about a quarter after 10, drummer Gerald Cleaver's Black Host fired off their opening lines. Black Host, who recorded an album on Northern Spy a few years back, Life in the Sugar Candle Mines, is Cooper-Moore on piano, Darius Jones on saxophone, Brandon Seabrook on guitar, and Pascal Niggenkemper on bass, with guest bassist Trevor Dunn. The two bass line-up also dug deep into a primal groove, but differently than the Digital Primitives. Cleaver, who seems to enjoy a good rock beat from time to time, provided a infectious rumble while Jones and Seabrook played short melodies over the bassists' persuasive riffs. Seabrook's kinetic energy is fascinating, short bursts of notes, like little tantrums, erupt from his fretboard, and Cleaver seem to guide their direction from behind the kit. Cooper-Moore's piano added a sprinkle of brightness to the group, and his deep, rhythmic playing worked incredibly well in it.

All in all, it was an exciting opening night for the festival, with many more exciting sets to come. 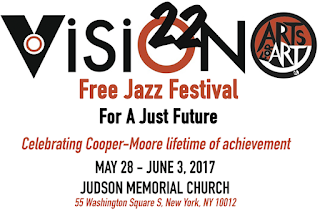 Sounds wonderful, Paul. It's a rotten job, but someone's got to do it. Good luck with the rest of the festival.

I guess now we're as close to a real "blog" as we've never been. :-)
I'm looking forward to the coverage of the rest of the festival. Black Host sounds very interesting.

Hope to see you there Paul. I'm performing Friday the 2nd at 8pm with Joe McPhee.