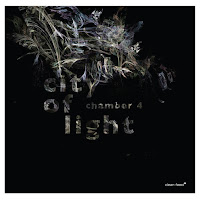 City of Light is the second album by French brothers Théo Ceccaldi (violin and voice) and Valentin Ceccaldi (cello and voice) with the Portuguese musicians Luís Vicente (trumpet) and Marcelo dos Reis (acoustic and prepared guitars, and voice). Recorded live on April 28th, 2016, at Les Soirées Tricot Festival in Paris, City of Light is fifty minutes of improvised chamber music. Clean Feed Records proclaims there were “no scores, no structures of any kind, no previous discussions about what to do or not to do or any type of conceptual reasoning,” yet the three movements impress as if they were a single impassioned composer’s carefully-constructed thoughts concentrated and immortalized in a written score. Each musician effortlessly nourishes an intimate exchange of tonal and rhythmic ideas and subtle alterations. Their first album together, in 2015, was praised as “most beautiful” by Stef Gijssels. This one is, I think, even more beautiful.

What if Paris—the City of Light—were translated into music? Its shifting moods—from dawn to dusk—given voice, and with all the hurly-burly in between? And how would it sound as it settles down for the night, and when it dreams? It may be foolish to imagine a narrative for the three improvised movements of City of Light, but the reference to Paris might allow an impressionistic one.

“Part 1” begins quietly, with the brothers Ceccaldi bowing broad strokes on violin and cello as if the city is waking at sunrise. Reis ping-pongs harmonics, keeping a lulling sort of 4/4 time, and lingers on a diffident finger-picked chord. Vicente probably horrifies his music teachers: he enters with some deftly-controlled “bad” embouchure—rushing air and smearing and shredding some nearly toneless rips. His polyphonic partly-valved dissonant tone clusters are choked, pinched, and constricted until he opens up with some plunger-mute vocalizing and fluttering glissandi. Half way into the first part, everyone plays with an ecstatic enthusiasm—if you want see some chamber music headbanging, watch the video. Reis strums flamenco style and finger picks out of regular time. The guitar and cello become drum kits and beat out a tribal rhythm. There is a low, lone voice, saying “Oooooh.” The Ceccaldis’ weave through each other’s arco until they drop out, leaving Vicente and Reis to finish in counterpoint.

“Part 2” begins as if the raucous city was already running full tilt. Everyone plays fortissimo and at once—strumming, drumming, blowing, the strings cutting jagged whorls. Four minutes into this metropolitan effusion, the quartet slows. Vincente puffs for air, inserts a mute. The cello and violin stretch low draping hammocks of sound. Reis interrupts their siesta, scraping and slapping his guitar like bongos, then he stomps a tube screamer pedal and heads into overdrive. At this point, I feel I should provide a spoiler alert—unusual things are about to happen; frightening things. Yet even if I ruin the surprise, you’re still going to jump out of your shorts when you hear it. A voice rises above the floor of sound singing an easy “ahhh” that grows louder, then quieter, then becomes an undulating “woooing” ululation. Almost involuntarily, the players begin to harmonize with this human voice—it orders their reactions. They skitter around it and instinctively accompany it. As the volume of each increases, there comes an unpredictable series of four absolutely blood-curdling screams. Each one is harrowing every time. Then all three on stringed instruments are singing vibrato oooos and shaping other terrifying growls with beastly transformations of their jaws and lips. If there really was no pre-planning before the playing began, I wonder if the berserker screaming scared the other three as effectively as he unsettles the audience. Following that maniacal vocal section, Théo Ceccaldi saws away on the violin as if leading a barn dance; Reis strums and flicks a tango, then pedals a wah-wah. Vicente wah-wahs back with a plunger mute. The cello turns drum, and Reis winds it all down, plinking on the bridge.

The business of the City of Light slows down in “Part 3.” The Ceccaldis gently sway; Vincente with a plunger mute echoes some shimmering phantasms of Dixieland; Reis resists the dying of the light with flamenco flourishes before drubbing away on a prepared acoustic guitar. For a while the quartet seems to play at cross purposes—as if there is a profuse confusion of unresolved thoughts as dusk falls. For a moment, they all seem to find the tonic, and by the end, the playing of each is sparse and snoozy as if fading into dreams.

In Wallace Stevens’ poem “The Idea of Order at Key West,” the speaker and pale Ramon Fernandez walk the beach listening to the crashing waves of the ocean and the singing of a woman, who also walks there. Her song—that human art—seems to accompany and translate nature, giving order and meaning to the incoherent “constant cry . . . of the veritable ocean,” which is “sound alone.” The speaker marvels at the woman’s ability to translate eternal, inhuman chaos, to harmonize with it to reveal order where there was only chaos. As we listen to Chamber 4’s City of Light, we, too, can muse about their mediation between us and the city’s pandemonium. Experience overwhelms us. Perhaps it only makes sense when shaped by human art. The effect of artfully-achieved music persists, even after the notes have faded, “arranging, deepening, enchanting night.” Chamber 4’s improvisations may provide only a fleeting sense of order to the hullabaloo of the City of Light, but like the singer on the beach in Key West, what they played is what they heard, and through them, this cannot help be anything besides beautiful.

Video for much of “City of Light, Pt. 1” can be viewed here:

Really like this. Thanks for posting and making me aware