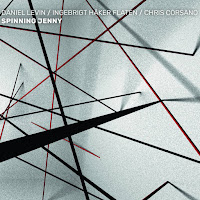 
The title of this recording is instructive when trying to unpack just what is going on inside; a “spinning jenny” is a machine that was created during the early years of the Industrial Revolution. It allows for a worker to control eight or more thread spools at a time, thus increasing output and decreasing the amount of work needed. Daniel Levin, Ingebrigt Håker Flaten, and Chris Corsano, the trio behind Spinning Jenny, are similarly efficient, teasing out countless threads of melody, texture, and tone from their respective instruments. There may be only three players here but, like the titular contraption, the result belies reality - at times, you’d swear you were listening to a much larger group.

As the album progresses, a pattern emerges: with almost mechanistic regularity, the trio move from jagged landscapes that stun the listener with their rhythmic and melodic complexity, to moments of quiet intensity that unfold at more measured tempos. The title track belongs to the former category; Levin, never content with simply treating his cello as a cello, seems to be trying to draw from it the full range of timbral possibilities - he whacks it, violently plucks the strings, and makes it howl. Flaten, meanwhile, moves along the neck of his bass restlessly, with notes dropping like leaden balls in nervy bursts. Corsano, as ever, is a joy to hear - it goes without saying that he has carved out a name for himself as one of the greatest improvisational drummers, and Spinning Jenny is all the proof you’ll ever need. Whether he’s launching intricate volleys of rhythm that bounce, rattle, and clang, or whether he’s relying on subtle brushwork to convey a sense of disquietude, Corsano is never lacking in the elasticity and suppleness that mark him as a master of percussion. “Pinophyta,” the next track, falls into the second category that I mentioned: that of pieces on Spinning Jenny that explore quieter, more restrained territory. Over the span of nearly ten minutes, the trio explore an architecture of anxiety, with each player contributing in subtle ways to the unsettling atmosphere. While it starts with whispers and sighs, it soon moves into knocks and, from Levin, something resembling death-rattles.

“Scutching,” in true oscillatory fashion, returns to the restive ferocity of the title track. As on that piece, the three players are constantly wrapping around and weaving through one another - sometimes they splice together in knots, and sometimes they fly apart in wild spirals, but the result is always enthralling. Like a rope being pulled on from both sides, the remaining pieces on Spinning Jenny maintain that same captivating sense of tension: the tension between reservation and release, a murmur and a shriek.