In March we already reviewed the wonderful double bass duet between William Parker and Stefano Scodanibbio, simply called "Bass Duo". But we love the bass, its sound and its possibilities, so here are some more recent double bass duo albums, interestingly enough by the same musicians, that we wanted to make sure you are aware of.

The artists are Raoul van der Weyde from The Netherlands, and Gonçalo Almeida from Portugal. Van der Weide is thirty years older than Almeida, and they have a very different musical background. The former played amongst others in the Burton Greene Quartet and various bands led by Dutch jazz pianist Guus Janssen. Almeida is based in The Netherlands, and his musical output is becoming quite prolific in the last years, playing in bands such as Tetterapadequ, Lama, Spinifex, Albatre, and recently in a trio called The Selva.

Both musicians seem to have found an interesting collaboration, one that started years ago in The Netherlands, and resulted in their first album "Earcinema" in 2015. They find each other in instanteneous creation, in-the-moment music. They don't seem to like rules and borders and patterns. We don't either. They seem to like creative insights, uncharted areas and intense interaction. So do we. 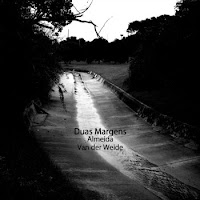 The album could not start any better than it does: with deeply resonating sounds of two double basses, hesitating, probing, reaching out, sensing the other one and creating a common flow. It is a short album, only 26 minutes long, with one single improvisation between Gonçalo Almeida and Raoul van der Weide, and recorded over a year ago at The Pletterij in Haarlem, The Netherlands. The title means "two banks" (of a river) as the cover illustrates. Even if they come from different angles, each with their own sound, they move in the same direction, creating the river together, with twists and turns and rapids and quieter passages, with rocks and boulders occasionally. A challenging and rewarding ride. 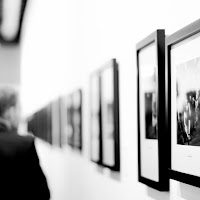 We find both musicians back on this album which is a little longer, with 8 improvisations, possibly inspired by the 8 pictures of the title and the cover art. Not much information is offered by the label, but that should not concern us. The difference with "Live At The Plettery" is that each track starts with a different approach, resultig in more variation and different dynamics. At times the changes within a single track lack some unity, but it has a lot of strong moments.

For anyone interested in double bass in improvised settings, both albums can be recommended.