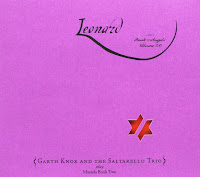 In late 2005, John Zorn started with his Book of Angels project, as part of his Tzadik label's Archival Series. In the series, he offers other musicians the opportunity to present their take on his Masada songbook. The second release was the excellent Azazel by the Masada String Trio with Greg Cohen, Mark Feldman and Erik Friedlander, who actually already performed as an ensemble on the album "The Circle Maker" in 1998, and later on Zorn's 50th birthday celebration series in 2004. The music offers this wonderful mixture of klezmer, classical chamber music and jazz sensitivities.

Now, so many years later, there is another string ensemble taking up the challenge: Garth Knox and the Sartarello Trio, with the leader on viola and viola d'amore, Sylvain Lemêtre on percussion, Julia Robert on viola and viola d'amore, and Agnès Vesterman on cello. Knox is better known from his classical work with the Arditti Quartet and the Ensemble InterContemporain.

Knox takes the Masada material and infuses it with classical sound purity, together with medieval, baroque, classical and contempary music as a wonderful counterbalance to the melancholy klezmer scales and melodies. The result is music full of variation and sudden changes in tonality and mood, full of drama, playfulness, some sadness and darkness but brought with an overall smooth and welcoming warmth.

The Book of Angels series remain a little too programmatic, so this is far from the raw authenticity of the music we tend to review, but it sounds fresh, well performed and arranged, not very demanding for the listener and a real pleasure for the ear.

On a side-note, the album is called Leonard, which does not sound like a very biblical name for a (fallen) angel, since it comes from the old German "Lewenhart" (Leeuwenhart in Dutch, Lionheart in English), yet there is a demon with that name, the three-horned goat from the Dictionnaire Infernal, published in 1818, a book that may be a further source for more Book of Angels to come ...