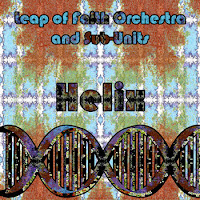 One thing you can say for sure about David Peck (PEK), the founder and inspirational force behind the Leap of Faith Orchestra: he’s on a mission.  A relentless mission, if the ever-expanding discography of the group is any indication.  A quick glimpse at Leap of Faith’s bandcamp page reveals dozens of recordings made within the last few years alone—and eight already in 2017.  A good number of the group’s releases are live recordings, such as Helix, recorded at Third Life Studios in Somerville, Massachusetts in March of 2017, and released the day after the performance, with PEK using a portable recording set-up he describes in a post to a previous review on this blog.  There is a classic DIY ethic to the group’s approach, equally evident in the making, producing, and selling of the music.  While the cumulative effect of this strategy can be a bit overwhelming for the listener/consumer—how exactly does one choose from this bewildering array of releases?  Where even to begin?—you have to hand it to PEK for utilizing all the resources at his disposal in pursuing his musical calling with fierce independence and tenacity.  This is no-holds-barred improvisation in its most challenging, uncompromising form, and it takes a special kind of resilience, determination and, perhaps, quixotic idealism to forge ahead with such an endeavor as long as PEK and his comrades have been doing it.

So what’s particularly interesting about this recording that might help distinguish it from the myriad other releases in the Leap of Faith catalogue?  It’s really a “double” release, in the sense that the first half of the recording is comprised of four roughly 15-minute improvisations played by “sub-units” of four members each from the larger orchestra, while the second portion consists of a longer, 50-minute improvisation involving all thirteen members of the orchestra.  While there have been plenty of performances with larger groupings of the orchestra, PEK points out in his notes on the recording that this is the largest assemblage of Leap of Faith to date in which the goal is (almost) totally unstructured improvisation.  In the past he’s used various scripts and rules to prevent the larger group from falling into chaos during unfettered improvisation, but here there was only one constraint: that every member of the orchestra had to lay out for twenty minutes of the performance.  (Leap of Faith typically uses a large digital timer in its performances to allow for rules like these to be followed.)  So with Helix, then, we get to hear the musicians in both formats: the smaller-scale, more intricate improvisations made by just four members at a time, as well as all the power and (semi-) controlled cacophony the larger group can offer.

The sub-unit performances are quite strong overall, with each offering distinctive possibilities through intriguing instrumental groupings.  PEK, who plays a sizable assortment of horns, as well as tube-o-phone, slide whistles, and many other items, is featured on the first, “Arc,” along with long-standing Leap of Faith member Glynis Lomon (cello), Matt Scutchfield (violin), and Matt Samolis (flute).  Lomon and Scutchfield define a lot of the terrain, as Lomon’s huge, extravagant sound is a constant dominant presence, with Samolis and PEK offering their own multifarious explorations, PEK in particular drawing from the astonishing array of sounds his range of instruments can create—and yes, manic vocalizations are also present.  Sub-unit #2’s performance, “Torsion,” showcases the guitar of Grant Beale and guitar synthesizer of Chris Florio, along with Zach Bartolomei’s own menagerie of horns (including not only alto and soprano sax but melodica and slide whistle as well) and Kevin Dacey’s drums.  Dacey’s percussion provides a somewhat more cohesive feel to this track, generating periodic bursts of collective fire, although with plenty of room for the others to maneuver as they see fit.  Sub-units #3 and #4 are similarly varied in both instrumentation and dynamics, with creative touches throughout, especially in percussive effects, something that Leap of Faith uses extensively; many members of the group have a range of options (glockenspiel, crotales, various metal objects, etc.) that they can use to complement their primary instrument(s).  This is critical to the anything-can-happen aspect of the group’s identity.  The listener has to be prepared at all times for bizarre juxtapositions and anarchic flourishes when listening to this music.

As for the 50-minute improvised extravaganza with the entire orchestra, “Helix,” it begins with what PEK calls a “wood cloud texture,” with most or all of the group members employing a barrage of percussive implements, before the piece starts to assume a shape formed around musical fragments introduced by several of the players.  The overall mood of the first section is a reticent one—perhaps conditioned by the 20-minute rule mentioned above, which would seem likely to subordinate individual self-assertion in the interest of maintaining group cohesion.  Witness the dusky, chamber-like segment between pianist Eric Zinman, cellist Lomon and guitarist Beale about ten minutes in, with plaintive phrases from PEK riding overhead, for example.  But it doesn’t take too long for the intensity to build, and as Dacey’s drums begin filling the room one senses the surging power waiting to explode.  It never quite does completely, and things do generally stay under control—perhaps a bit too much, in fact, as at times the performance does seem to lose energy—although there are some hair-raising moments along the way capable of startling and challenging even the most experienced listeners of freely-improvised music.

“Helix” is a striking example of what can be done by larger ensembles within the realm of free improvisation.  Perhaps PEK will soon give this a try with even larger permutations of the Leap of Faith Orchestra.  Given the group’s trademark spirit of intrepid risk-taking, it’s hard to imagine he won’t.

Note: the following YouTube links include the entire recording, and they really are valuable in shedding light on the group’s music.  Especially with the frequent switching of instruments, having a visual referent adds another level of interest to this fascinating ensemble: