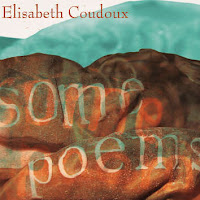 German cellist Elisabeth Coudoux (née Fügemann) may not be known by many yet, but that will not take long anymore. She combines the solid technique of her classical training at the Carl von Weber Music School in Dresden with a strong-willed vision on improvised music. She is member of the Scott Fields Feartet, and of Zeitkratzer ("a perverse subversion of musical genres"), and several other ensembles, as the recently reviewed "The Octopus".

"Some Poems", her first solo project, is a winner. Like poems, the music is intimate, personal and deep, full of wonder and persistent discovery of one or the other musical aspect, as in the alternation between plucking and bowing on "Found Not", or repetitive phrases, as "In Sounding Bodies", leading to little surprises without loosing track of the direction she's taken. Her music is about her interaction with the instrument. It is physical, exploratory and interactive. She does not hesitate to go well beyond the boundaries of comfort, as in "In A Swaying Ship" or on "Besets" with its sliding overtones and out-of-tune instrument. Her music can be playful as "In A Faint Voice", of full of deep gravitas and shifting harmonies as on "Knut". At 2:24 on "Within The Sounding Body", you can hear faint pop music in the background (is it a car driving by, a mobile phone annoucing a caller? we don't know) but funnily it does not disturb the deliberate and electronically looped bowing of the piece, the only non-acoustic moment of the album.

I can only recommend this. She is strong. She has the skills, the character and the musical vision. This is her first appearance on this blog, but surely not the last one. Oh, and by the way, all the tracks together form a poem:

"A faint voice
found not
in sounding bodies

shaken boundary conditions
within the sounding body
in a swaying ship

Only time, no changes" 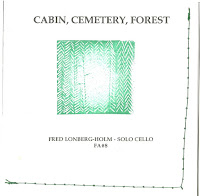 Fred Lonberg-Holm no longer needs an introduction, but what is worth mentioning that his own label, called Flying Aspidistra, named after the George Orwell novel "Keep The Aspidistra Flying", has now put the entire catalogue on Bandcamp.  On the label, you will find other solo cello albums or string duets with Charlotte Hug, Carlos Zingaro, David Stackenäs. For those interested, he also has another Bandcamp website with even more music.

"Cabin, Cemetery, Forest" was recorded in 2009, and may have been released on CD before, although I couldn't find references to it. Now it's available digitally and that is good news. Lonberg-Holm is not a crowd-pleaser, and he even describes himself as an 'anti-cellist', applying a totally unconventional way of playing. His instrument groans, sighs, screams and sobs, sometimes in calm resignation, sometimes in full agony, but it never sings, it never dances, forget about harmony, peace and tranquility. The sounds are agitated, nervous, physical, full of turmoil and surprise, and move without an actual plan but pushed forward by the last-but-one sound in a kind of musical stream of consciousness. It is demanding listening, and I think you need the right context to give it the time it needs. If anything, no matter how often you listen to it, it will never sound familiar. And that's an achievement by itself, because that's where you need to be: out of your comfort zone.