The third night of the Vision Festival began with the Visionary Youth Orchestra, a volunteer orchestra or by Arts for Arts. Unfortunately, they started too early for me, but from what I was told, it was quite inspiring. Under the guidance of Jeff Lederer (woodwinds) and Jessica Jones (tenor saxophone, piano) , the students played off a graphical score, dug into charts from Ornette Coleman Haden, and David Murray, and a performed piece composed by Cooper-Moore. Coming from a family of music educators, and music a defining part of my youth, I can only imagine how exciting and eye opening playing for the Vision Festival must be for these kids.

Around 7 p.m., violist Matt Maneri, pianist Matthew Shipp, and drummer Whit Dickey took the stage. Vision Festival organizer Patricia Nicholson gave a very warm introduction to the band, expressing that she had known them for a long time and had seem them come to be the musicians that they are now. She exclaimed, “what a great evening, we started with the kids and now we have the grown ups ... sort of!"

Their set was a release show for Whit Dickey's AUM Fidelity recording Vessel in Orbit. The trio kicked off with a clatter at the drums and then slowly worked their way into the music, this was a group planning to take its time. The rich sound of the viola, a quick sprinkle from the piano, and some light brush work on the drums, and the ground was prepared.  The music quickly tightened, Shipp introduced a circular pattern that he leaned into, Maneri contributed long single note phrases, while Dickey’s restrained percussion gave the others plenty of room to work. The music was serious, and while the tempo picked up and the tension grew, it also felt very restrained. Maneri’s melodies carried an Eastern European flavor, and at times blurred the lines of classical and free improvisation, Dickey's playing afforded a lot of space, and no matter how far from a straight beat he went, he never lost the pulse, and Shipp could easily bring the band to a sustain pedal driven peak - and he did. This group goes back a long time and even their simplest improvisations are compositions on the fly. 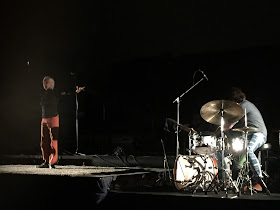 Next, dancer K.J. Holmes and drummer Jeremy Carlstedt performed an arresting piece of dance and rhythm. The drummer, on the stage, began with a quiet tense beat, and for a while, was alone. Then a shrill cry came from the left side of the audience and the dancer was upon a chair, arms stretched upwards, about to fling herself into the dance floor. Moving with incredible agility, Holmes was playing … objects became props, charcoal from the artist making live drawings went on her face, an audience member became a dance partner, and her approach seemed to be to break the comfort zone between the audience and the actor. It was fascinating.

Between the dance and the next act, violinist Jason Kao Hwang’s Burning Bridge, Nicholson came back to the stage and made the sad announcement that Bern Nix had passed away. Nix, a guitarist, was a member of Ornette Coleman’s Prime Time and a long time Downtown New York artist.


Hwang’s large group took the stage and worked their way into an incredibly effective piece titled ‘blood’, which was a meditation on the emotional traumas of war both personal and societal. A heavy piece, no doubt, rendered with emotion and precision by his extended group with Taylor Ho Bynum (cornet), Joe Daley (tuba), Steve Swell (trombone), Ken Filiano (bass), Andrew Drury (drums), Wang Guowei (erhu), and Sun Li (pipa). It was the latter two, playing traditional Chinese string instruments, who, along with Hwang, formed the center of the group’s sound. The contrast between Hwang’s violin and Guowei’s erhu (a two-string fiddle-like instrument) was mesmerizing as were the textures created between Guowei and Li. After a challenging start to the piece, the group picked up the pace as they launched into a lurching rhythm that offered the first of the solos, then into smaller improvising sub-units like Swell, Guowei, and Filiano and Bynum, Drury, and Filiano. The enormity of the piece did not truly settle in until it ended. Suddenly the feeling became overwhelming and the only thing you could do, was what many in the audience did, sigh and say “wow.”

Some last minute substitutions were made early in the evening, and pianist Vijay Iyer sat in with poet Tracie Morris, and Joe McPhee stepped in for Charles Gayle, who was performing with William Parker (bass) and Michal T.A. Thompson (bass). I couldn’t stay for these performances - so, I expect to hear about them during tomorrow's show.