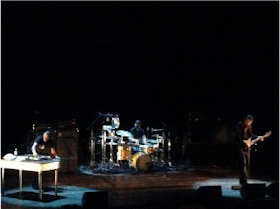 After the mind-blowing, excessive and vibrant night with the epic Seven Story Mountain V the hangover was inevitable - and it came in form of Caspar Brötzmann and his band.

Often the musicians of the A’Larmé! festivals can be heard in more than one collaboration and this tradition was picked up last night again. Brötzmann, who opened the festival with Thurston Moore at the Berghain, started the evening with his trio consisting of Massimo Pupillo (bass) and Berlin-based Swiss drummer Alexandre Babel. The band has played together only three times before. In the 1990s, when Brötzmann had his Massaker project, his whole approach was new and innovative. And even here, it somehow worked at the beginning. Brötzmann rejected to display his fascination for Jimi Hendrix’s sound, yet he let his guitar scream and whine, he used extreme feedbacks and distortion in front of two Marshall amp towers. Massimo Pupillo maltreated his bass, hitting and strumming it like a madman, while Alexandre Babel threw in lots of gong and cymbal sounds. The music was reminiscent of a huge press plant. However, this might have been interesting for 20 minutes, but Brötzmann and his fellows decided to play for almost one and a half hours. There were hardly any changes, the band was rather interested in creating a monolith, a symphony of loudness, pure horror - maybe they wanted to comment on the horrible situation in many countries of the world. But the whole concept was not sustainable, in the end it was too loud, too monotonous, too unstructured, stale and boring. On the other hand, some people might call that consequent.

A common remedy for hangovers are pickles and herring - and some good old blues. Joe McPhee and Paal Nilssen-Love were the perfect remedy. Actually scheduled for last year’s festival (their gig had to be cancelled) they were warmly welcomed by the audience. Joe McPhee showed his predecessors how to make a statement on the social and political situation by complaining how futile it is for music to change something. In a heartbreaking spoken word performance accompanied by Paul Nilssen-Love’s percussion he accused the greed of a powerful caste, stating “no more leaders, no more idols, only beggars“. Of course McPhee and Nilssen-Love didn’t re-invent the wheel but McPhee referred to the fact that some circumstances had changed only on the surface, which justifies the existence of the music he and Nilssen-Love play. They were at their best when McPhee indulged in his love for John Coltrane’s blues, when he was singing into the saxophone, when he was hollering - he’s still the great man of sorrows of free jazz. As usual, Paal Nilssen-Love accompanied him delicately. The audience thanked them with standing ovations.


The cut to the next project was a hard one, a rather female counterpoint to the muscular rock of Caspar Brötzmann and Thurston Moore (who was to close the evening): Chris Corsano (drums), Okkyung Lee (cello), Christine Abdelnour (alto saxophone) and Magda Mayas (piano) were actually a symbiosis of two duos. The press release of the festival announced that the new quadrophonic system would be ideal for this music, but unfortunately this wasn’t the case. Luckily, the quartet was really good, in spite of the sound problems especially Okkyung Lee seemed to have. The musicians were pushing the boundaries of their instruments, only Lee remained rather conventional (in a very positive way). Mayas played prepared piano exclusively, working the interior of the piano, which resulted in humming noises, muffled tones and kalimba sounds, while Corsano was rather wiping and scrubbing his drums than actually drumming. Abdelnour delivered lots of squeezed sounds (most of the time she didn’t use a mouthpiece) while Lee threw in a myriad of glissandi. They sounded like a beehive in turmoil, the seriality of their music gave it a very percussive character.


Then the audience had to move to the big concert hall to salute the man many of the people were waiting for: Thurston Moore and his band with My Bloody Valentine’s Debbie Googe on bass,

James Sedwards on guitar and his old Sonic Youth pal Steve Shelley on drums. It was interesting to watch the many people in black dresses, jeans, shirts or T-shirts, some with No FX and Sonic Youth logos on it, who were overwhelmed with the two bands before and were thirsting for some old school rock. And Moore gave them what they expected: a very solid alternative rock show reminiscent of the melodic side of Sonic Youth plus a vintage audio-visual light show full of space pictures and particles dancing around. Songs like “Cease Fire“ and “Speak to the Wild“ were rawer than the album versions, on the second the band delved into a noise orgy, but here you could see that they were no skilled improvisors. All in all it was a nice gig, though.

The festival will end tomorrow with day 4.
Paul on Saturday, August 05, 2017
Share