In recent years prolific Catalan, Lisbon-based reeds player Albert Cirera became a powerful improviser and composer to reckon with. He may be known for his vigorous, in-your-face sound but this description hardly cover his qualities as a resourceful, restless improviser who is always searching and exploring uncharted sonic terrains. He is also a skilled conductor who understands deeply the mechanics and the spirit of game-like e improvisation and a clever composer who is not shy of reflecting on his gentle side. 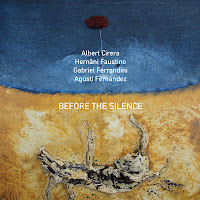 Cirera Lisbon Trio teams him with the rhythm section of the Portuguese RED Trio -  double bass player Hernâni Faustino, who also plays in the Staub Quartet and Clocks and Clouds quartet, and drummer Gabriel Ferrandini, known also from sax player Rodrigo Amado's Motion Trio and his collaborations with sax player Jon Irabagon and guitarist Thurston Moore, and fellow-Catalan pianist Agustí Fernández, a mentor of  Cirera “who enlightened and opened with a hammer some minds” of Cirera generational fellows, and now hosts him in his own Liquid Trio.  This quartet recorded its debut album live at the Catalan Voll Damm Festival Jazz Vic in May 2015.


The quartet flirts wisely between control, reserve and silence and eruptions of ecstatic, boundless power. The performance opens in a quiet, restrained mode yet a dense and restless one, but as Carlos Pérez Cruz writes in the liner notes “silence can catch fire”. This opening piece, “Before”, swings later on between fast and fiery improvisations and quieter, chaotic segments that still contain the accumulated tension of former segments, all highlight the colorful sense of detail and the intense, rhythmic drive. The four musicians play as a four-headed organism that sound like it established long ago its independent logic and strong-minded, focused voice. “The” deepens the quartet's strength as an organic and experimental unit as all employ myriad of extended techniques, searching and sketching strange, beautifully nuanced ideas. Then Fernández and Cirera harness all into another series of ecstatic, dramatic attacks, in its turn, stress the always inventive pulse of Faustino and Ferrandini. “Silence” begins again with minimalist, quiet search for almost silent common ground, comprised of faraway, fragmented sounds, suggesting looser, abstract aspects of free improvisation, but eventually transform into another passionate, manic conclusion. The short encore, “Coda”, is a gentle, melodic piece that reflects peacefully on the the magnificent, fiery storm. 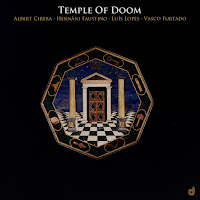 
Already on the tense opening of “Dogmatic Elders Of Doom” all four musicians are busy searching and gravitating towards corresponding,  extreme and even more extreme terrains. They offer a series of tough, energetic collisions that cover all the spectrum,  from muddy, earthy ones - led by Cirera and drummer Furtado - to the most atmospheric ones, shaped by Lopes and Faustino. The shorter “A Lambskin Apron” and “The Sublime Degree” intensifies even further this restless mode, full of unpredictable, aggressive clashes.  The longest piece, the 19-minutes “Disrupted Sacred Geometry And The Void” introduces more space to the quartet improvisation and shifts its intense and fast interplay to one that reference a fiery, free jazz meeting. This piece also enables the quartet to investigate more open, and sparse textures and experiment with surprising, weirder sounds, spicing its interplay with generous doses of cinematic, raw noises and metallic attacks. The last piece “Outward Introspection” ventilates all the energy and chaotic power, accumulated in the previous abstract detour, now heading for a final brutal, ecstatic orgy of sounds. 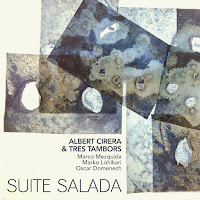 If Cirera sounded on the above-mentioned albums like a sax player who is well-versed in the legacy of charismatic fire blowers - from American Albert Ayler to German Peter Brötzmann - mixed with the sonic experiments of British John Butcher, now he surprises as he embraces modern jazz, sounding as modern-day incarnation of the lyrical side of Coltrane the singing tone of Jan Garbarek. Suite Salada also stresses Cirera strengths as composer and a leader. This is Cirera sophomore album with the Barcelona-based Tres Tambors - pianist Marco Mezquida, one of the busiest pianist in the local scene, Finnish double bass player Marko Lohikari (who plays in Mezquida trio) and fellow-Catalan, drummer Oscar Doménech, the same musicians that recorded the 2012 debut, Els Encants (FSNT).


The suite develops with a unique restraint, refinement and poetic elegance, from the folksy, enigmatic “S’auba” where Cirera focuses on the flute, followed by the sensual, infectious pulse set by Tres Tambors to “Tantra”, before Cirera takes the lead mid-piece his charismatic, lyrical Coltrane-ish solo. The passionate “Anys” is introduced by a dramatic piano solo of Mezquida that references Keith Jarrett in his most sing-along, rhythmic playing. Cirera joins only on the last part of this piece, after Tres Tambors solidified the rhythmic pattern, singing beautifully with his tenor sax as Garbarek to Jarrett melodies on their Scandinavian quartet. After the free-improvised interlude “Jaleo” the quartet returns with the tender, peaceful ballad “Es Fosquet”, led by Cirera thoughtful, melodic solo. The suite is concluded with another,  serene ballad, “Talis” where Cirera gentle, singing playing along Tres Tambors minimalist, refined playing sketch a beautiful conclusion to this emotional suite that lingers long in mind after it has ended. 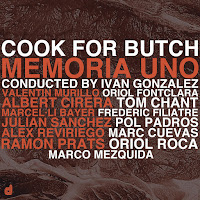 Memoria Uno is a musical lab, founded and conducted by Barcelona-based trumpeter Iván González, who played with Cirera in the now defunct Free Art Ensemble. Memoria Uno musicians meets once a month to experiment and expand on the the  conducted improvisation ideas and techniques developed by Lawrence "Butch" Morris, the Sound Painting of Walter Thompson and John Zorn’s game-piece Cobra.


Memoria Uno's debut album, Crisis (Discordian, 2014), featured a mammoth forty-piece orchestra, but Cook for Butch scales-down the number of musicians and offers a dialectic process between two sextets, Cirera and drummer Ramón Prats, both play together in Agustí Fernández's Liquid Trio, among others on the left side, and sax player Tom Chant, known for his collaborations with Eddie Prévost, among others on the right side, and pianist Mezquida in the middle. The album was recorded live at The Jamboree Jazz Club in Barcelona on October 2015.


Cirera co-conducts two short pieces with González. “Duot (Conducción #63)”, as the title of his duo with drummer Prats, sound as a concise, chaotic and wild free jazz improvisation that comes from the Sun Ra school. Cirera game-piece “Bingo” is the most interesting piece on this album. Cirera builds the tension and the driving pulse wisely, colors both with nuanced, resonating layers of ecstatic blows, and concludes with a powerful shout of his own. 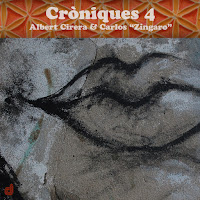 During 2014 and 2015 Cirera recorded, in Lisbon, a series of free-improvised and intimate meetings with Portuguese double bass player Alvaro Rosso, German cellist Ulrich Mitzlaff, and Swedish sax player Olle Vikström. The meeting with violinist Carlos “Zingaro” Alves, one of the Portuguese pioneer free-improvisers - who has collaborated before with innovative improvisers such as Derek Bailey, Barre Phillips, Peter Kowald, Evan Parker and Joëlle Léandre - was the last one documented in this Cròniques series, captured in studio on October 2015.


Cirera and Zingaro connect immediately as if they have been playing together all their lives. Their mutual, deep listening serves both beautifully as they process instantly each other ideas, already on the impressive opening, “From There Above Sides Wherefrom You Come, Run!” Cirera and Zingaro shift organically between different dynamics - muscular and tense, silent and introspective ones, focused on microtonal sounds, and sensual and lyrical that still sound weird yet tempting. Both employ different extended breathing and bowing techniques to sketch urgent, fast-shifting and kaleidoscopic textures - as one of the pieces is titled - that only gets more intimate, and more profound as this intimate, poetic meeting continues. 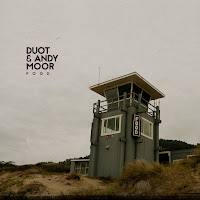 DUOT is the free-improvising duo of Cirera and fellow Catalan drummer Ramón Prats. Duot's fourth album, Food, is released only on vinyl plus a download option, and is a collaboration with British guitar player Andy Moor from the Dutch band The Ex, known also as an experienced improviser with Lean Left (with Ken Vandermark and Paal Nilssen-Love) and a collaborator of French poet Anne-James Chaton and Greek composer and electronics player Yannis Kyriakides. Food was recorded in Barcelona on December 2015.


Moor blends immediately into DUOT's physical intensity but colors it it with his clever, economical playing. His playing on the opening, longest piece “Skim” intensifies the dramatic tension and its slow-cooking progression, but also suggests a slower, patient course to the erratical explosive one of DUOT.  The following shorter pieces “Slow Food” and  “Bass Cabinet” explore open-ended, expressionistic-cinematic textures, where all investigate timbres and fragmented tempos. “Gudi” even suggests a surprising and emotional variation of Moor's abstractions of old Rebetika songs with Kyriakides. Other, more intense pieces as  “Arrebato” and “It’s Your Business” sound as scaled-down variations on Lean Left massive, rhythmic interplay.