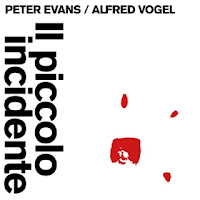 Peter Evans plays trumpet with an uncommon inventiveness, intensity, and athleticism. Strange and previously unimaginable sounds emit from his bell at an incredible speed and in limitless combinations. His breath and formal virtuosity are impressive all on their own, yet the sheer physicality of his playing and his endurance make an equal impression. Evans produces an unexpected onslaught of musical ideas, as if he aspires to play all the parts of an orchestra by himself—and all at once. While Evans’ playing on Il Piccolo Incidente is more playful than usual, it lacks none of his usual rigor or intelligence. The panoply of Evans’ vigorous and inimitable “extended” technique is on full display, but he deploys his profound facility with a lighter touch, and a little humor—beginning with the title. An “il piccolo incidente” is a “small accident,” like a faux pas. The idea of “small accidents” chimes well with the unpredictability of spontaneous composition and improvisation. There is also the literal reading: Evans plays a piccolo trumpet, so Il Piccolo Incidente is a record of the things that occurred, by chance, when he and Alfred Vogel invented seven songs lasting 33 minutes.

No forms, modes, or shapes can denote Evans truly. He moves, measure by measure, from the baroque through bebop to minimalism and back again, picking up what he missed the first time. The quantity of notes astounds the ear, and while this could come across as showing off, his playing is entirely devoid of arrogance. Instead, there is an obsessive insistence on aggregation, an almost manic anxiety that a timbral possibility might be missed. As in a cartoon thought bubble floating over a composer’s head, Evans’ mind seems to be madly flipping pages of scores, a blizzard of notes falling everywhere. Occasionally, he perseverates with dizzying speed on a phrase, and, as with a minimalist composer, the repetition begins to blur how we hear the notes—and the nature of the notes themselves. At other times, he’ll linger on a note or phrase, emphasizing the background of silence. He can sound like a tweaked-out Miles Davis with a Harmon mute, but he reminds me most often of Adrian Belew and Robert Fripp, solo and in King Crimson. Evans coaxes the animal kingdom out of his horn with the exuberance of Belew twang-bar-kinging the cries of a lone rhinoceros, an elephant, or a big electric cat. Then again, like Fripp, Evans can braid emotional and tonal registers with utter grace, frightening us then breaking our hearts with beauty.

Alfred Vogel does not attempt to compete with the blitzkrieg of Evans’ playing. Instead, like a magpie, he’s collected a nest of things, and all those things percuss. He does not “accompany” Evans, nor keep time; instead he plays around Evans. With sticks, drum kit and cymbals, bells and cans, and bits and pieces of this or that, Vogel is a vigilant partner, yet in a way that seems wonderfully indifferent to Evans. It’s easy pay little attention to Vogel because of the glam and glitter of Evans, but when one does one marvels at the genius of Vogel’s restraint, which contributes elegantly to the joy and playfulness of this album.