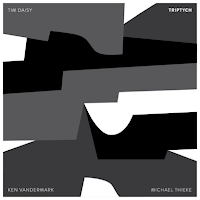 Ken Vandermark once spoke about the extremely frail ecosystem that is exploratory and free music and how something, however seemingly small, can wipe out a large portion of it in a single motion without many noticing. Vandermark’s ecosystem can be as large as the great-barrier reef or as small as one person’s decision to protect it. We are all very lucky to be in the presence of the fruits of these musician’s labors, and we have a duty to do whatever we can to foster its health. Some of these musical statements can be a huge as a tectonic plate shift to a subtle ripple in a wave. Ken Vandermark’s ecosystem is all encompassing. A life could be dedicated to Ken’s life’s dedication to the art. To ride along with him requires dedication and open ears. His relentless touring schedule (airline policies and sound checks) goes into it, his eye for photography and film goes into it and his ever growing DIY handbook on social media goes into it. His humbling self-criticism is an inspiration and a reminder to not just sit and let the world go by without contributing to it in some way.

So this brings me to Triptych.

Released on Tim Daisy's Relay Records this past April, it came as a bit of an unannounced addition to the Vandermark ecosystem. In order to slow this Vandermark monologue; a definition. A triptych, 3 art panels (musicians) usually held together by hinges (common musical direction) or three musical works designed to be listened to together. This recording has indeed three musicians, Tim Daisy (Drums, radios, percussion and the composer of the three before mentioned tracks), Berlin based clarinetist and composer Michael Thieke and Ken Vandermark (tenor sax and bass clarinet) who are hinged together by Daisy’s compositions and by 5 interspersed, improvised pieces which round out the short 33 minute record and are titled for the pairings and solo efforts of the musicians involved.

The three composed pieces (At Argyle, Yellow Fern, and Tuesday at Noon) start as very listener friendly tunes that soon break away into each player’s deconstruction. The whistle-alongability is just a front and soon you delve into the non-melodic player. For example, track one, At Argyle, Thieke plays the main melody as Vandermark plays counter point so effectively that he is creating a new way of listening to it forging a situation of nearly biting my cheek as my whistling tries to keep up. The 5 improvised tracks (KV-MT, MT-TD, TD, MT, and KV) bring a different substance to the recording. Even though all of the tracks have their merits, I keep going back to KV. In a few short moments of sound Vandermark manages to add so much to his ecosystem. It reads as a complete statement as well as a bridge between his last though and his next. It may not be a tidal wave but the ripples will surely have the momentum to cross an ocean.