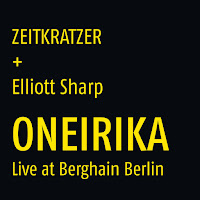 Elliott Sharp and zeitkratzer are an obvious match, it’s no surprise that they’ve often worked together in the 20 years of the band’s existence. In addition, there have been two duo releases of Reinhold Friedl, the ensemble’s mastermind, with the New York multi-instrumentalist.

Their new collaboration, ONEIRIKA, is named after the Greek word for dream and conceives a daydreamy sonic landscape. It’s mainly inspired by the music of John Cage, especially regarding Sharp’s method to process his individual notation via the picture-editing software Photoshop, which opens up further artistic possibilities for the musicians involved in the project. Moreover, this approach is a perfect jumping off point for a band like zeitkratzer, which is interested in the intersections of light, image, sound and motion and the high-quality amplification of acoustic instruments.

The composition consists of ten different sections, but actually the piece should be received as one. Sharp has created harmonic and rhythmic patterns the musicians pick up and repeat in the different parts. The snorting and groaning of the first section based on short saxophone pops and percussion staccatos is recapitulated in “Section 10“ however, it’s electronically processed and alienated. In “Section 4“ Sharp intersperses string and reed riffs which sound disharmonic and fragmented, as if the band wasn’t sure what to do with the different elements. These unison riffs return in “Section 6“ and “Section 9“, where they have the intensity of a heavy metal track. Again, electronics are used to create a variety of sound colors, they also push the track, the listener is overwhelmed with cacophonous barrage. Here the music is reminiscent less of John Cage than Philip Glass.

Between these very intense and tight sections, there are others that relieve the tension, like “Section 3“, “Section 5“ and “Section 7“. The atmosphere here is spookier, the rhythm less hectic, but they also follow a similar structure: All three pieces start slower and more silent, but there’s a dynamic crescendo in the middle before the music fades out and gives way to more dramatic up-tempo parts.

ONEIRIKA presents a gloomy musical utopia, the dream is not a pleasant and optimistic one. But, as often with zeitkratzer albums, beneath the violence and brutality there’s also something comforting and joyful.

ONEIRIKA  is available on vinyl, as a CD and as a download.

You can buy and listen to it here: