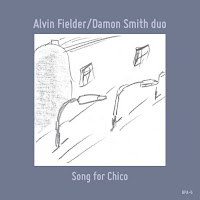 That free, improvised jazz gives pleasure to its connoisseurs seems obvious. Even more obvious is the displeasure it causes everybody else.

Avant-garde music of any genre—for those who play it, compose it, and listen to it—answers a desire to be disoriented, a hankering to indulge in lawlessness, a longing to be free. It makes us happy—we get it, and it gets us. If, like other kinds of music, free jazz resembles language, what sort of communication is it? We often refer to the interplay between musicians as “conversation,” but other than the fact that notes follow notes in linear time, most free, improvised jazz eschews ordinary, idiomatic syntax. To some, it sounds like random noise, yet to us, it is beautiful. Or maybe it’s true: we’re just weird.

The album Song for Chico, with Alvin Fielder (b. 1935) on drums and Damon Smith (b. 1972) on contrabass, contains what lovers of free jazz love in spades. Here is an example of the two of them at work:


Even one versed in the intricacies of improvised music would be hard pressed to describe their playing as a “conversation,” yet we believe there is a sort of communion because the playing sings in a language whose mysteries we feel we understand. But how?

There are six tracks on Song for Chico, and each seems completely improvised (though I’m not certain that is wholly true of “Variations on ‘Untitled’ by Cecil Taylor” or “Roots by Johnny Dyani,” but I’d say their improvisational-to-composed content is high). Watching Alvin Fielder behind the drums and Damon Smith behind his bass, and listening to them, leads one to wonder if they are particularly aware of one another’s presence: what each plays might be what they would play even if the other one wasn’t there. Because what they both play—note by note—so lacks a clear, standard harmonic connection or any melodic sequence, when Fielder quotes “Salt Peanuts” in “Improvisation 1,” even that short bit of something familiar feels, somehow, odd. Yet to me, and probably to them, their songs cohere as songs. Perhaps it is a matter of mood or tone, or of some kind of simpatico.

What is most evident on each of the tracks on Song for Chico is Fielder and Smith’s technique. In fact, the album is almost entirely “about” technique. Fielder wields a battery of sticks and brushes; he makes music using every nut, bolt, stand, skin, cymbal, and underside of his kit. He almost never “keeps time.” In this sort of music, time is not a thing that can be “kept.” It is fluid and unpredictable—like nature. Smith’s technique puts me in mind of Wallace Stevens’ poem “Chaos in Motion and Not in Motion”: Smith’s playing is “like the wind that lashes everything at once.” He is an aggressive bassist, stormy and dramatic. Scratch tones, ponticello, tremolo, spiccato, ricochet, glissando, trills, detaché, legato, louré, slurs, slaps, martelé, jeté, sautillé, staccato, saltato, col legno, saccadé, buzz, snap, and nail pizzicato—name a technique, or extended technique, and chances are it’s in a song and in Smith’s arsenal. There is nowhere he won’t bow or pluck or strum—hard. Sometimes he even rubs his bass’s belly.

The species of free, improvised jazz on display on Song for Chico is what music sounds like when the “like” language barely holds, or does not apply at all. Yet Fielder and Smith are not just two guys in a room making an erratic cacophony. If free jazz is “like” a language, or mode of communication, it must be something like the communication within a murmuration of starlings, or a school of fish, or like a peloton of 120 professional cyclists, elbow-to-elbow, hurtling down Rue d’Somewhere at 40 MPH. The consciousness of the other and the communication between them about speed and direction is immediate, precognitive, innate. They are all headed somewhere, but who knows where, how long it will take, or how they will get there, exactly? There is a pleasure in the practice of working together as one mind and one body, in the stretching and condensing, in the speed or agility that would be impossible if alone.

Alvin Fielder and Damon Smith are masters of their art. Their communication—with each other and with us, the listeners—seems subliminal; it transmits outside of the range of the “normal” consumer of music. It is a signal broadcast to all, but not all receivers are able to pick it up, or decipher it as theme or dialogue. Yet for those attuned to it, the music they make is magical, and “what they have to say” is persuasive and elegant, even if we have a hard time explaining why, or how, it is. “To interpret language,” Adorno claims, “means: to understand language.” And “to interpret music means: to make music.” “Musical interpretation,” he notes, “is performance.” Fielder and Smith interpret a style of music that demands and rewards our interpretation, and demands performance from the critic, too.