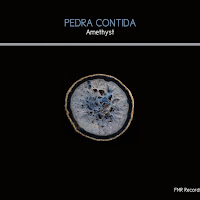 About 7 minutes into “Scree,” the opening track on Pedra Contida’s sophomore album, Amethyst, the slowly building tension threatens to break. Like watching a storm build along the shore, there’s a steady accumulation of pulses, from Angélica V. Salvi’s harp and Marcelo dos Reis’s guitar, to Miguel Carvalhais’s computer and Nuno Torres’s bright alto, and finally to João Pais Filipe’s masterful metallic percussion (set aside some time to scroll through Filipe’s Tumblr, featuring his handmade gongs and cymbals). And then, it’s over. A moment later, “Chalk” kicks off with a brief trio improvisation, with Torres, Carvalhais, and Filipe. But, where were we? Where are we? The mystery prevails, underlining the dynamism in this quintet’s free improvisation. By the mid-point of “Chalk,” Salvi and dos Reis have locked into an asynchronous rhythm that, again, threatens to break open. Dos Reis cranks up his electric for a few effective teases, then quietly recedes back into the rhythmic undercurrent.

The quintet members’ paths have criss-crossed in a number of configurations, including dos Reis and Filipe in Fail Better!, the dos Reis and Salvi duo, and Filipe and Salvi’s recent spot’s on the latest @c album, Three-Body Problem. Like Pedra Contida’s previous album, Xisto, Amethyst was recorded live, this time in Coimbra on November 21, 2015. The Paris and Mali attacks were at the forefront of the news, with Brazil still reeling from a devastating flood resulting from a burst dam. And in Portugal, an election season marked by the rise of the left-wing was well underway. I mention all this just to point out that it was definitely not a time for quiet reflection. The global mood was tense and uncertain, and the quintet’s response is apt. I think a lot about the ways improvisation, especially, is an inherently reactive medium, a mode of performance that allows each player to channel her or his feelings about the world, whether that’s meditating on losing a loved one or making a bold statement for justice. In this way, Amethyst captures five gifted players in an extended conversation that intertwines optimism and uncertainty. Torres’s solo in “Obsidian” traces lines between dos Reis and Salvi, while Filipe and Carvalhais keep the rhythmic structure in a state of unsteadiness. It’s absolutely captivating.

The album ends with “Touchstone,” a deceptively somber piece that really highlights Carvalhais. Unlike most of the other tracks, there’s no obvious center. Instead, the band gently ripples outward, with dos Reis providing ballast near the 4-minute mark in a nice duo with Carvalhais. It’s the rare quintet that manages such a radical lineup with such a strong senses of freedom and balance, but Pedra Contida has definitely cracked the code.