Toxic: Mat Walerian, Matthew Shipp, William Parker – This is Beautiful Because We Are Beautiful People (ESP-Disk, 2017) **** 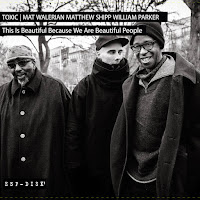 ESP-Disk had a chance to make a 5-star record from these sessions and blew it.  Strong words maybe, but true.  The musicians are all great (duh) but the stellar Walerian never quite gels with the unstoppable brilliant force that is Shipp/Parker on these recordings.  However, all three musicians make up for their lack of cohesion by grazing farther into the experimental ether for inspiration.  The risks pay off big time on the three tracks that aren't called “The Breakfast Club Day,” although not in ways you'd normally expect – the primary one being that the trio hardly ever functions as one unit.  Those three tracks (“Lesson,” “Peace and Respect,” and the title track) are lengthy enough to make up a complete album.  And not just a good album either – a great one. Why the disc wasn't shortened – or released as an LP with the two parts of “The Breakfast Club Day” tagged on the CD version as a single long bonus track – is a mystery to me.  It's not that this track lacks merit.  It's just that as a whole, it doesn't work – even when split into two parts.  Simple as that.

Parker and Walerian open “Lesson,” on flute and shakuhachi, which is a larger Japanese bamboo flute.  Shipp enters close to the three-minute mark, plucking the strings of an opened piano, hinting at some alternate world where Sun Ra wrote the soundtrack for Fellini Satyricon.  Parker solos on bass, letting a single dampened note ring (as much as possible) before Walerian and Shipp re-enter, widening the space – more Kurosawa than Fellini now – and mounting tension.  It's a smart, intriguing piece of music that sharpens your ears in preparation of what is to come.

The title track begins its life as a film noir blues before setting the concept free.  Walerian's reed lines are sultry and melodic, as well as spacious and exploratory.  Shipp provides the perfect canvas onto which Walerian can paint.  I feel like Shipp is often aware that his dialogue with Parker can be exclusionary, because he appears to make an extra effort on these sessions to allow additional space as an open welcome to Walerian.  It's often a tightrope walk for Shipp and he makes the very best of the situation.  Walerian reprises his bluesy lines as Shipp and Parker slowly and deliberately bring the music down to a close.

Walerian's slow and deliberate bass clarinet lines shine at the beginning of “Peace and Respect,” as Parker and Shipp dance and punch each other like boxers.  Out of nowhere, Shipp switches to electric organ and immediately the proceedings become more tentative, weirdly relaxed and tense simultaneously.  Shipp works up a vamp as the new tonal setting becomes familiar and Walerian and Parker play against it confidently.  The music slows down a bit, getting looser, until it becomes a drunken ode to Frank's Wild Years.  There is enough old-timey circus hobo rattle here to make you smell a stew of bourbon and greasepaint and hot cat piss on a sunbaked tarp.  Parker's voicings take on the sound of human moaning, appropriately enough.  Shipp switches back to piano for the last minute of the piece, turning what would've been a climactic ending into a short tag that fades out quickly – in a rare brilliant moment of editing.

My advice is to buy the CD – and program tracks 1, 3 & 5 (in that order) before playing so you can hear the excellent album within.