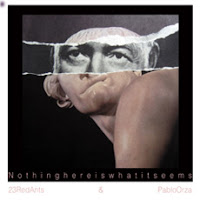 I have to admit that the album nothing here is what it seems was the first by 23RedAnts I came across. So I didn't really know what to expect. I decided to listen to the album a few times without taking notes or thinking about a proper first line.

So I listened to the music. To the album without reading a lot about the people involved. And that is what I recommend to do with this album. Listen to it. Listen to it a few times.

There is a howling wind. There are high squeaking sounds. Someone might knock on wood. On a wooden instrument. Maybe even a guitar. Does someone play a cello? Even with a bow?

All I hear are different sounds following each other, accompanying each other. I can't make out the source of the different squeaks and klongs and scratches and tweeds. Unfamiliar territory for my ears. But, this is what I came here for.


After listening to the album over and over again I realize some structures or recurring sounds and noises. So I become familiar with it. That changes a lot. I am no longer busy with recognizing different sounds or the question how these sounds were created. I start to follow the music. And yes it is definitely music. It is music because it is created with instruments (guitar and cello and also a computer. At least one!). But it is also music because it gives me a certain "musical" experience. The longer or the deeper I lean into the music of 23RedAnts & Pablo Orza the more I hear how the three musicians work together and create the music together. They listen to each other. It sounds as if I could hear that. They play together and create this strange and beautiful record.

The whole album has five tracks from three and a half minute to eight minutes. Each one has a slightly different sound and shape. After listening to the album quite a number of times I sensed a different prevailing mood. The first track "for nothing" is a very quiet introduction. The sounds come in one by one and take their time. It takes almost a minute to bring in a second distinguishable sound. The whole piece is a very slow and calm track. The prevailing mood is cautiousness if that makes sense to the reader who has not listened to it before.

The second track "the avian flu" is the shortest of the five. It brings in new sounds and something that could be recognized as a pattern or even a beat though it changes soon after you found it. With this track 23RedAnts and Pablo Orza (who plays the prepared electric guitar) come a little bit out of hiding. In a very relaxed mood.

Track three "unt.itled#1" is centered around a familiar sound. A plectrum (or something similar) scratching over a guitar string. A few minutes in a controlled feedback builds up and down and the piece turns into a conversation between the different sounds. It's not a fight - it is a discussion.

Track four "why do you say that_" changes the shift completely. The electronic sounds start of (created by Italian sound artist Niet F-n) with some field recording or recognizable noises. But this one has a lot more high squealing sounds. I guess it comes from the cello played by Macarena Montesinos. This one seems far more intense than the tracks before.

The last track "Manipulados" starts of with something that sounds like a synthesizer chord with an echo over it. The guitar und different electronic sounds come in. Again a string of a guitar (or a cello) is manipulated (as the title implies) and there also occurs something like a beat. This could be the fight that didn't start in "unt.itled#1".

While reading my own review I realize again how difficult it is to find words to describe the music. So I return to the beginning: Listen to it. And listen to it again. Give it a third try. It is worth the time and the effort.

Strange how it sounds after a few takes on the album I experience the album as a very relaxing hearing experience. I get lost in the sounds the tracks and discover new things over and over again. And this is what I expect from a new musical experience.