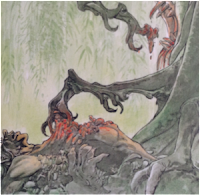 When I recently talked to legendary German free jazz drummer Paul Lovens he told me that he had a new project with clarinetist Rudi Mahall (they both know each other from the Globe Unity
Orchestra) and Swiss guitarist Flo Stoffner, a man who’s relatively new on the improv scene. I came across him only this year at the Zurich Intakt Festival when he played a very good duo set with Evan Parker. Lovens has a high opinion of Stoffner and said that he was a musician who’s up and coming.

Stoffner is a promising musician indeed. He says that he’s influenced by guitarists like Jimi
Hendrix, Bill Frisell and John Scofield, but his style rather reminds me of Derek Bailey or Olaf Rupp. Unlike many people he thinks that there’s a lot to discover on this instrument, there were still new fields worth to be explored. His playing is rather lean than offensive and boisterous, he uses precise little melodic fragments here and there. In this trio he foils Rudi Mahall’s swinging approach with very clear reductionism.

Mein Freund Der Baum (My Friend the Tree) is reminiscent of a collage - sound snippets are taken out of contexts, they’re rearranged, just to be rejected, changed, and rearranged again. The music constantly shifts and fractures. The result is a fragmented, diverging, only seeming chaos on the one hand, but it’s actually a perfect piece of work on the other. Blurred and smudged sounds, disgorged and pulled, compete with abstract blues riffs á la Captain Beefheart as if marbles were rolling down a street paved with strings. The music’s a gigantic in-and-out breathing, a permanent stop and go. Paul Lovens is the key figure to me, his rare, accurate tidal-wave-like attacks, which oppose his sublime bevy of percussive clatter, force Mahall and Stoffner into new, surprising dynamic contexts.

Finally, Rudi Mahall is excellently attuned to his band mates. There’s a passage towards the end of “Mein”, which is characteristic for the trio’s music: Lovens delivers an almost steady beat, Mahall responds to the phrasings of the guitar, matching Stoffner’s chopped and scraping notes with a series of squeaky high clarinet tones. The effect is extremely interesting, at times it’s like friends discussing a complex problem - enthusiastic, reflective, and pointed.

Mein Freund Der Baum is available on CD. You can buy it from http://www.wideearrecords.net.
Paul on Sunday, October 29, 2017
Share