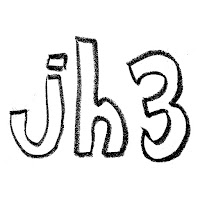 Eyal Hareuveni’s great series of reviews; ‘The Swedes Are Coming’ has always made me, a Swede, very happy. In the third iteration, found here, Jari Haapalainen’s 2 first albums of ‘powerjazzfusion’ or just ‘punkjazz’ are reviewed. Both reviews and music are highly recommended.

The members of JH3 are all long in tooth with drummer Jari Haapalainen himself being a long time celebrated artist as guitarist with ‘The Bear Quartet’ and producer of ditto as well as many other big names like ‘Sahara Hotnights’, ‘Johnossi’ and ‘The (International) Noise Conspiracy’. Furthermore, we have saxophonist Per ‘Texas’ Johansson, who’s comeback album De Långa Rulltrapporna I Flemingsberg was celebrated here last year, and who can also be heard in ‘Fire! Orchestra’ and finally bassist Daniel Bingert, son of saxophonist Hector Bingert who lead the latin jazz band ‘Latin Lover Big Band’ in which Daniel was a member, and who’s grown to be one of Swedens (if not _the_) most prominent latino musicians.

Jari Haapalainen Trios third album Fusion Nation is in many aspects a different creature than the first two. The music released by JH3 has so far been music with no holds barred. The messages are delivered through short, powerful yet very effective tunes with titles that carry our thoughts to more aggressive genres, yet with an elegant and humorous touch. Punkjazz truly is a good way of describing this music. Where Mats Gustafssons ‘The Thing’ usually hits the listener to then back up and run you over again, again and again JH3 stretches arm and fist far back to then deliver a sailorman’s hammer fist where it hurts the most to be done with it and walk away. Will this third album leave me on the floor with a broken nose I wonder?

Where the first two albums ‘Fusion Machine’, and ‘Fusion Madness’ were more hard-hitting and psychotic in its presentation and overall atmosphere, ‘Fusion Nation’ paints a more introspective and lyrical picture which surprised me at first. Having first listened to the two first albums this morning, ‘Fusion Nation’ actually makes a lot of sense. Don’t get me wrong, this is not for the faint of heart and after about 11 minutes and 30 seconds, we’ve arrived to the song ‘Blod’ (Blood). JH3 takes me to madness-town for 30 seconds, then stops to allow me to breath normally again – yet ever so briefly. Then another 20 seconds of intense, full throttle music, and suddenly it’s all over. If I’m ever under serious time pressure, yet needs an injection of jazz adrenalin – this is it.

But going back to the beginning this album starts with the song ‘Fotfäste’ (Foothold) which has the beat of someone being told to walk around the block before being let into the bar. Texas plays an expressive and talking melody that blends well with the beat. The following song ‘Vegan to win’ brings us back to the party with a humorous touch to the melody yet without losing a beat. The album keeps delivering boiled down feelings dressed in compact packages of 1-3 minutes each.
JH3 keeps surprising with keeping the messages short, yet manages to deliver that they set out to deliver. In ‘En Delad Rymd’ (A Divided Space, but can also mean A Shared Space…) JH3 has Texas floating in space with Daniel playing a dark carpet of bass underneath while Haapalainen’s drums are infectious and steady - a dizzying experience with a characteristicly JH3 melody.

In ‘Soldiner Kiez’, which is also the highlight of this album, I recognize JH3's lyrical qualities from the first two albums. A solid beat which takes me to 80’s hiphop, mixed with electronic-like drum effects is laid out over a mere total of one minute and forty seven seconds during which Texas plays a simple yet very cool melody. I’d like to hear this one as an introduction after which the band could expand and crush the melodies and beats into a +10 minute version. I know that this is what JH3 did NOT want to do; they peeled off all the ‘extras’ to boil songs down to what they really enjoyed hearing, and performing. Of course, if I feel the need for longer excursions, maybe I just pick a different album by a different artist. Yet, one can still wish.

The album finishes off with a psychedelic 23 second reverb echo chamber ‘The Blanket’. I’m left feeling a bit dizzy but happy. No broken nose, no physical pain left behind, yet a strong wish to hear the three JH3 albums one after another.

In summary, JH3 has created a very cool 27 minute punkjazz album that stands very well on its own, but which in my opinion should be companioned with its predecessors. My grade’s caveat is that you pick up all three.

JH Trios third album is to be released on October 10. A taste of punkjazz from the upcoming album can be heard here: