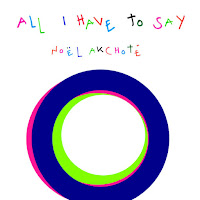 Earlier this year, guitarist Noël Akchoté released a solo triptych, All I Have To Say, All I Should’ve Said, and All I Forgot To Say, recorded in March, April, and May, respectively, of this year. For an artist with so many hundreds of albums to his name, both as leader and as supporting member, it’s near impossible to describe something as a must-own or some kind of definitive statement. And while these aren’t necessarily the latter, this triptych does feel like a major statement and sincere attempt to speak, via guitar, as directly and plainly as possible.

The layering of blues, jazz, free improvisation, and rock are all filtered through Akchoté’s singular guitar playing. The overall shape and movement of the three albums takes you through long sections of Akchoté’s catalog, before giving over to his interpretations of a wide array of jazz classics, including Ornette, Haden, and Motian, each of whom he’s previously recorded tributes to. Then, there are the takes on mid-to-late 20th century American classics. His take on “Bird On a Wire” is ridiculously sublime. Restrained and heartfelt, it’s an absolutely gorgeous reading of Leonard Cohen’s classic, made all the more effective as Akchoté finishes this by tearing into Keith Jarrett and Sam Brown’s “Take Me Back.” Later on All I Have To Say, he reprises this moment with a brief reading of Willie Nelson’s “Crazy,” but instead follows it with Ornette’s “Sadness.” An interesting thing about Akchoté and Mary Halvorson’s continued collaboration is that each can record a solo take on the same track and have such diverse interpretations. (Halvorson also recorded Akchoté’s “Chesire Hotel” on her solo album, Meltframe). The effect is recreated again on All I Should’ve Said when he takes on John Coltrane’s “Cherryco,” which is followed by Ornette’s “Law Years.”

Because I’m not a guitar player myself, I often find it difficult to explain what’s special about a particular musician. But there is something so uniquely unquantifiable about Akchoté, both as a composer and a performer. In a brief interview, Halvorson describes his openness and wide range of music knowledge, and I’m most struck by the remarkable manner in which he synthesizes all this into his expressive style. In that sense, this All I… series is absolutely a must-own and very much a statement release, allowing a listener to home in on Akchoté, very much exposed in this solo setting, and take him at his word.