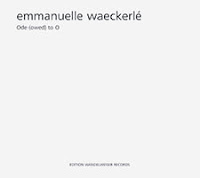 When I listen to Emmanuelle Waeckerlé's Ode (owed) to O, I'm pulled into a state of meditation. I feel relaxed; my body lays back, but my mind stays active. If I had to find a musical comparison for this sensation, I think I'd compare it to ambient music, but with a tighter grip. Of course, there isn't any wrong way to be affected by music, but I can't help but think that this is not at all what Waeckerlé intended – as this album is really quite serious. Although I've found this to be a delight to daze off to before bed, allow me to explain what makes this a much more special album than the many which may evoke a similar state.

Ode (owed) to O is the British artist's (simply calling her a composer wouldn't be doing her justice) first album to be released on Edition Wandelweiser Records, it clocks in at just over two hours, and it almost exclusively consists of readings of original conceptual poetry. That being said, the album is so much more than simply poetry reading: the album is broken into four pieces, two short and two long, and each comes with its own wonderful composition which I will elaborate on shortly. First, I'd like to discuss the nature of the text, which is very important.

When one first listens to album opener (story of), they'll likely have a tough time figuring out what exactly it is that Waeckerlé is talking about, assuming they haven't done any prior research. The sentences are in an odd order, much seems to have been left out, and lines and words tend to repeat themselves without any sense of pattern. The sentences are blatantly sexual, and seem to tell the story of a sexual experience by a woman named O. After hearing the album, it wasn't a great surprise to discover that the text was derived from Pauline Réage's 1954 novel Story of O, one of the first published feminist erotic novels (disclaimer: I have not read the novel), which tells the story of a sexually submissive woman named O and her voyage into sexual slavery. It feels so odd that Waeckerlé would choose to recite the text of a tale of BDSM in such a calm, abstract and relaxing manner, but the listener will come to realize that that is simply the nature of the feminist view Waeckerlé wishes to portray, which I believe to be quite different than Réage's. The largest, and most obvious, theme here is the release of O, referring to the letter O although it is certainly a representation of the character. More general metaphors can be found as well: such as sexual liberation, especially from a feminist perspective, the freedom of women as a much larger concept, or, more literally, the deliberate deconstruction of language which has been used in the art world for decades.

(story of) is the simplest track on the album, and is the only one to feature the composer as the sole performer. It is also, sadly, the only piece where the score / process is not publicly available on the composer's website. What it seems to be is a collage of sentences from the novel, with a special emphasis on the space between sentences, which she executes by pasting sentences into individual channels in sparse intervals. Rather than awkward digital silence, the piece uses a remix of a piece by collaborator André O. Möller (who also mixed and mastered the album) titled squire 62, which is a soft field recording primarily consisting of wind along with some occasional faint music deep in the background. (story of) is a provocative introduction to the album due to its explicit content, the time the listener is given to think about each sentence, and the insistent repetition of phrases. It sucks the listener into the world of O and heavily lays the feminist themes upon them, serving as an important piece of context, especially for those unfamiliar with the novel, for the more abstract experiments which will follow.

(looking for), the longest track at 52 minutes, is performed by a septet of speakers which includes the composer, André O. Möller and label owner Antoine Beuger. The background for this one is an edit of a field recording by Möller titled claude lorrain - ambient, although it plays a much smaller role in this piece than it did in (story of). (looking for) almost consistently has the sound of somebody talking, often multiple at once, so the specific words lose much of their importance. The performers are reading Waeckerlé's book Reading (Story of) O [http://www.ewaeckerle.com/projectbox/Obook/], a deconstruction of Réage's novel, along with instructions [http://www.ewaeckerle.com/files/pdf/readingstoryofOinstructions.pdf] which state to read a number of words containing O which coincides with the page number (1 on page 1, 3 on page 3, 2 or 5 on page 25, 7 or 9 on page 79, etc). What we get is a longform stereo portrait of words, several words are repeated several times by several performers, including the letter O; feeling more like an art installation than any other piece of music. It's simply a beautiful listen, and seems to demonstrate the joy of O, or why she needs freedom. Additionally, the very long fades in and out give the recording a natural feeling, and assist with the meditative atmosphere.

Next is O(nly), the album's other long track, at 45 minutes, and its greatest composition (in this reviewer's opinion). If the first track only used sentences which contain the letter O, the second only used words which contain the letter O, it only seems natural for the third to only contain the letter O. That is true here, but the twist is the use of instruments: Antoine Beuger plays the flute, and Samuel Vriezen plays the melodica. As per the score [http://www.ewaeckerle.com/files/pdf/onlyscore2017A4.pdf], the performers read along to a new deconstruction of the text. When they find an O in a sentence, they begin to sing it, and its placement in the sentence dictates how they will sing it, and the instruments follow similar instructions. This makes for several possibilities for naturally occurring harmonies and patterns, which thoroughly excites me. Sadly, I found the performance here to be poor. The singers all sound awkward and amateur, which is likely is the case, and that's something that ends up being distracting (especially in vocal music). I can't help but feel that this piece would have become something special in the hands of more experienced vocalists. I don't mean to imply that I don't enjoy the performance, because I do, but it is easy to imagine a more affective performance. There is a long section at the end, the last ten minutes of the piece, where only the instrumentalists play, and I think that this turned out wonderfully. The two performers, Beuger especially, play intuitively and softly, creating beautiful harmonies only when necessary.

Album closer O(hh) is the shortest track at 10 minutes. O(hh) follows the path of the release of O, from full sentences, to sparse words, to repetitions of the letter, to empty breathes, to silence: a wonderful idea for an album closer, and this is demonstrated beautifully in the score [http://www.ewaeckerle.com/files/pdf/OhhscoreA4.pdf]. Möller starts reading on his own, and Waeckerlé joins him a couple of minutes later on the page after his, making what I'll describe as an anti-round. It becomes even more wonderful when their text begins to sync up, due to their different breathing speeds. Similarly to O(nly), O(hh) allows for an instrument to accompany them – this time they decide on a surprisingly harsh synthetic tone. What this represents, I'm unsure, but it creates an interesting counterpoint to the speakers' soft voices.

It's clear that the four pieces work wonders in sequential order, charting the entire path of O's release and allowing O(hh) to operate as both a summarization and a final, complete release. I think that the significance of O will be different for many experiencers; it seems to represent a vague idea of femininity for myself, but I'd wager that it represents something more personal for Emmanuelle Waeckerlé, and for those with personal experience with the novel's subject matter. These notions are important and worth thinking about, but they aren't what fill my mind while I listen – my mind is actually near empty in those moments; it isn't until after that I realize the album's feminist connotations, or the significance of the text experiments. When I listen, I feel lull, and become likely to fade in and out. It's due to the soft voices, the repeated words and phrases and the comforting femininity; but perhaps what is most important is the way that the words and phrases are completely removed from context and diction. This allows me to take in the words superficially, without having to think of their meaning, which is not dissimilar to how a mantra works.

So, whether one is looking for a powerful feminist expression, a series of innovative text experiments, or a slab of avant-garde bliss, Ode (owed) to O delivers it in an exciting way. Although the performance of what would have been my favorite piece leaves more to be desired, Waeckerlé proves to me a powerful and multi-faceted artist, and I look forward to experiencing future projects of hers. And for those who I've managed to capture the curiosity of: I highly recommend reading the scores which I've linked, as they are all gorgeously presented.
Paul on Monday, November 13, 2017
Share