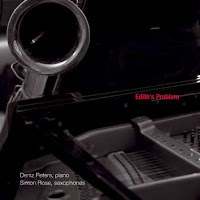 Two years ago I was quite ecstatic about "The Ten Thousand Things", the duo album of baritone saxophonist Simon Rose and pianist Stefan Schultze.

Now we find him in another wonderful duo setting with Austrian pianist Deniz Peters. Deniz Peters? Never heard of him, my apologies. He describes himself as a "music philosopher and aesthetician, musicologist, musician (classical piano & improv, inter arts). Some tertiary teaching background; currently exclusively doing research (theoretical and practical). Super interested in non-linguistic types of thought".

This last aspect is what we find here. Both musicians play in an incredibly intimate atmosphere, you can call it zen-like, with lots of space for silence, but then the sounds of both instruments have a little too much emotional power to compare it to buddhist-like detachment. They create tension, they create a focus on deep interaction with a minimum of notes.

The album's title refers to Edith Stein, a German jewish atheist with a PhD in philosophy turned christian Roman catholic nun turned Saint, who wrote a book about "On the Problem of Empathy", describing empathy as being different from intellectual understanding and from impersonal and involuntary affective contagion". In the case of Rose and Peters, it is all about listening, and translating feelings at the same time, in fact the essence of free improvisation. Despite this, the music is very much not sentimental, in stark contrast to many albums with piano-sax duets.

And despite the overall calm and intimate atmosphere, the sound can be hard and harsh and raw, with no other structure than both men's feelings and intuitive collective development of the sounds of their instruments, which are used with careful precision to use the minimum of notes necessary to create a sonic universe.

On some tracks, such "Resonance, Part I", Rose plays only one low note, sustained and blown with increasing pressure as if shifting the tone upwards, and repeats it a hundred times in different ways, as if it was an animal in distress, or a persistent exploration of some unknown vibration, and it's mesmerising.

They don't need many notes to create their musical universe, but it is full of measured developments, full of focused intensity. It has this wonderful combination of a light and open texture, with a fragile and vulnerable sound, and a mood of sober gravitas. Sounds you can almost touch ...

An album to be savoured.