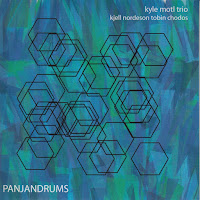 The panjandrum was an invention intended to solve a problem: how to punch tank-sized holes in fortified Nazi walls along the land-mine-seeded beaches of Normandy without British troops having to run through machine-gun fire. The proposal was to attach a pair of large multi-rocket-propelled wheels to a barrel-sized axle packed full of explosives, fire her up, aim her Naziward, and voila! Easy peasy—except for all the variables, which caused the monstrosity to wobble wildly off course, transforming the whole apparatus into a flaming firework display. This out-of-control blaze of desperate and crazed ingenuity failed every test, yet each trial was a different, and always fascinating, display of elemental forces battling it out. They called it “panjandrum” after a bit of nonsense theatrical comedic verse—a name associated with waddling, pompous, self-aggrandizing petty officials.

The theoretical problems the Kyle Motl Trio’s album Panjandrums attempts to solve may not be as world-historical as were faced at Normandy, but these musicians do seem to take their cues from the mad careening power of that fiery contraption. Kyle Motl (bass), Asher Tobin Chodos (piano), and Swedish percussionist Kjell Nordeson (drums) are graduate students in music at the University of California, San Diego, where the exploration of the complexities of music is part of the curriculum and musical boundaries are exploded by human ingenuity and might. The album’s title is a sort of poetic musical conceit, and so are tracks’ titles. The first and fifth, “Constellaxion 1” and “Constellaxion 2,” may be attempts to solve for a cosmic X—unless there is no solution for X. Why, in an agglomeration of stars, do we find figures and patterns? Are they there, or do were project our merely human fictions into the heavens? In the unstable textures, dramatic chaos, oblique chords, flurries of bass notes, and tottering percussive wobbles of both “Constellaxion 1” and “Constellaxion 2,” occasionally we can pick out musical patterns. Like the axle of the panjandrum, however, none of these centers hold, for piano, bass, and drums whirl off again and again, making their own orbits in their own chaos. “Nothing but Panjandrums,” “Salsa Urbs,” and “xOr” maintain dialogues with jazz traditions of melody, rhythm, and standard time, yet each have moments of off-kilter contrapuntal motion, abrupt changes in texture, volcanic volleys of cymbals, skittering bouncing bows, and bright ignitions of sound from the piano. Motl, Nordeson, and Chodos drift in and out of one another’s lines, the figures they make sometimes coalescing gently before breaking off at odd angles. Sometimes it is only sheer force and speed that keeps the songs from flying apart.

In some ways, and at some moments, Panjandrums feels like a straight-forward, “traditional” piano-bass-drums-trio free jazz album. The songs mix some composed elements with improvisation, and they often end in tight, nicely tied-up figures. Each of these musicians certainly can—and usually do—play in styles more obviously edgy, extended, experimental, or avant-garde. The beauty of the music on this album, however, does not come from the wild unpredictability of extended technique but exists at the level of composition and in the improvisatory, speculative, many-layered evolution of imagination. Disparate time signatures weave subtly through irreconcilable melodies. This music is complicated, dissonant, atonal, and abstract, but it is never so complex that it forgets that in its changes it must also give pleasure.

Listen to, and please purchase, the album here: