The Quartets of Satoko Fujii


Japanese pianist Satoko Fujii and trumpeter Natsuki Tamura, a couple on stage and in real life, need no introduction. Both are always in search for new sonic adventures and their new, ad-hoc quartets - with American trumpeter Wadada Leo Smith and Japanese, New York-based electronics player Ikue Mori, and with Japanese violinist Keisuke Ohta and drummer Takashi Kitani further emphasize the depth and breadth of Fujii and Tamura's musical vision. These quartets play Fujii and Tamura's compositions, however interpreted in the most open and personal manners possible, blurring the distinction between the written segments and the improvised ones. 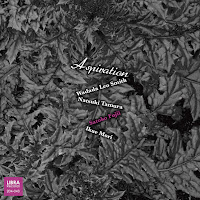 This releases celebrates the 20th anniversary of Fujii and Tamura’s label, Libra Records, and it offers many reason to celebrates. It is a more than a meeting between four opinionated musicians, each with a highly personal language of its own, but a truly inspired one.

Fujii and Tamura played before with Ikue Mori, and Mori recorded before with Wadada Leo Smith on his experimental album with electronics players, Luminous Axis (Caravans Of Winter And Summer) (Tzadik Composer Series, 2002). But the all four never played together before the recording of Aspiration at Firehouse 12, New Haven in November 2016.

Fujii who initiated this project proved that her instincts were right. She composed four pieces, Tamura contributed one, and there is a collective free-improvisation. But all the compositional strategies simply serve as road maps to intimate, fearless improvisations. These experienced improvisers let the spontaneous act of music making lead them, wisely opting to nurture and share the music and avoid forcing themselves on the music. This open approach actually intensifies the quartet immediate and sharp interplay.

Each of the six pieces has its own character. On the opening piece, “Intent”, Smith and Tamura and later Fujii embrace the fragile-fractured drone of Mori, contrasting and resonating the tone of the electronics with their acoustic instruments. The quartet moves organically from one sonic event to another, while Mori’s drone is still the basis for all events. The free-improvised “Liberation” sound as a composition with a distinct lyrical, contemplative texture before it erupts with dense interplay of all.
“Floating” does float between enigmatic, silent atmospheres and brief rhythmical outbursts, before concluding with a melodic note from Tamura. Fujii leads the melodic title-piece, slowly building the dramatic momentum while intrigued by Mori otherworldly sounds but backed by Smith and Tamura urgent abstractions of the melodic theme. “Evolution” is a brilliant, conversational piece, that stresses the deep, vibrant immediacy of this quartet. The music is being sculpted from the first second to the last one, in solo, duos and quartet segments, with no clear course, but without losing its focus and coherence. Tamura’s “Stillness” weaves an quiet, peaceful texture comprised of Mori’s minimalist, alien sounds, the meditative trumpets of him and Fujii melodic sensibility that connects all elements.
Fujii wrote that she dreams of making more music with this quartet. So many others. 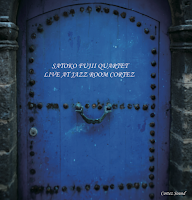 Fujii and Tamura are joined in this quartet by drummer Takashi Kitani, who plays in Fujii's New Trio and the Tobira Quartet, and violinist-vocalist Keisuke Ohta, who is considered, as Fujii says, to be “something of a patriarch on the Tokyo free jazz scene.” Ohta played with almost all notable Japanese jazz musicians, including trumpeter Itaru Oki, koto player Michiyo Yagi and the Shibusashirazu group.

Fujii has performed - but not recorded - with Ohta twenty years ago, when she returned to Japan after completing her studies at the New England Conservatory in Boston. When Fujii was invited in December 2016 to play at the Jazz Room Cortez in Mito, Japan, where she recorded her solo piano album Invisible Hand (Cortez sound, 2016) Ohta came to her mind “and I couldn't picture any other person to join us.”

You can count, again, on Fujii's intuition. The addition of Ohta brings fresh insights to Fujii's compositions. The quartet offers an extended interpretation of “Convection,” from Fujii’s New Trio album, Spring Storm (Libra, 2013), but uses the compositional ideas as tools for a surrealist, free improvisation. This piece morphs organically between episodic exploration of folk themes, Dadaist vocal exchange of Ohta and Tamura, dramatic-playful confrontation, eccentric sonic searches and occasional visits of the original themes. All without losing the playful interplay and the dramatic tension building.

The even longer rendition of “Looking Out the Window”, spanning 37 minutes, first played by Fujii debut album of her original trio (with double bass master Mark Dresser and drummer Jim Black, Ninety-One, 1997) is more eccentric and exotic. Ohta chants in a kind of invented Middle-Eastern lingo and his electric violin wraps the quartet sonic envelope with 1970s prog-rock flavors. Now the quartet - in a series of unaccompanied solos and as a tight unit - investigates weird and unusual timbres, textures and dynamics. It even flirts with Brazilian rhythms of Kitani, an impossible hybrid of Greek-Celtic folk themes suggested by Ohta, and a touching, lyrical trumpet solo from Tamura. Fujii, the last soloist, navigates wisely back to the composition theme and leads the quartet to a powerful reading of this theme.