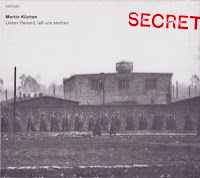 Martin Küchen knows how to pick titles. It already starts with the title of the album; “Lieber Heiland, laß uns sterben” or in English: Dear Savior, let us die.

Küchen has furthermore selected titles for the tracks on this album with great care for choice of words and with a seemingly poetic intention.

The Cathedral in Lund (small city in the south of Sweden, 20km north-east of Malmö) was consecrated in 1145, however the crypt which is considered to be one of the ‘oldest rooms’ in Sweden and the recording place of this album, was actually in use already in 1123, and built in 1121. The crypt is pretty much intact since its construction. I’m hoping to one day return to live there as the years living in this culturally and academically rich city was some of the best years in my life.

You can walk around in the crypt ‘virtually’ if you head over to this website.

Reedist Küchen and sound engineer Jakob Riis went in to the crypt of the cathedral on an evening in May to make this album. It can be summarized as a journey inwards. It’s a calm space and a haven from a world that doesn’t have answers to the big questions of life and meaning anymore, yet seems to have no patience for the spaces in between words spoken. I feel that Küchen and Riis with this album opens the door to a room for reflection and with what’s heard on the album I’m offered time for contemplation and perhaps also thoughts about the big questions. The perishability of life is ever present, and accepted. Cheese and wine needs time to become tasty, interpersonal relations also need time to deepen and to become multidimensional. The sounds, screeches, breathing – even the ambience heard from around the cathedral – all fit into this concept of sounds happening there and then, but created in a historical context that is about 900 years old. I’m sharing my personal thoughts about how feelings I get while listening to this album.

The album starts off with the title track ‘Lieber Heiland, laß uns sterben’ which immediately sets the tone for this album, with breath meeting a sacral melody line. It’s then followed by ‘Music to silence music’ which also has almost congested breaths moving alongside clicks and notes. The droning sound effects in ‘Purcell in the eternal Deir Yassin’ is calming and soothing. There’s an anticipation of something that I can’t put words to, it’s hard to explain.

I first had a part in this review about how Bach’s “Ich ruf zu dir Herr Jesu Christ” (I call to you…) meets “Küchens Ruf zu mir Bezprizoni” (Call me…) but when editing and re-reading it, I found that this was mostly a conversation in my head. Küchen manages to get me to drift off in thoughts about how songs, music, sounds and titles fit together and what that means.

But in the last song ‘Atmen Choir’ (Atmen means to breathe in German) the cathedral bells start to ring, and I realize it’s not for me to draw lines between titles, historic facts and feelings. I’ll leave that to you. And pick this one up, it’s a fantastic release from Küchen.
Stef on Friday, January 12, 2018
Share