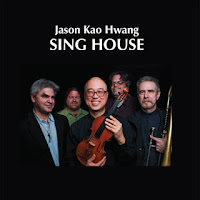 The opening track of Sing House, "No Such Thing", begins with an angular melody which quickly breaks out into an entertaining chaos of rapid, seemingly free improvisation. This is a fitting introduction to the structure, though that word feels very limiting to describe much of the music here, of Sing House, Jason Kao Hwang's adventurous four-track album. Hwang has assembled a formidable quintet of past collaborators: Andrew Drury (drum set), Ken Filiano (bass), Chris Forbes (piano) and Steve Swell (trombone). Hwang is democratic in his band-leading, with each member given a moment in the limelight to showcase their talents throughout the record.


The tracks are all extended enthralling journeys, with the shortest song, "WhenWhatCould", clocking in at just over 11 minutes. When the aforementioned chaos of "No Such Thing" subsides, after a brief, high octane drum solo from Drury, the theme is restated and leads into a second, much darker mood, which is introduced by the piano and the bass. The energy here is impressive, with Hwang delivering a fantastic solo towards the end of the fourth minute. What is key here is how the track weaves in and around the boundary between the straight-ahead and the avant-garde, Forbes' skillful solo starting out relatively tame before upping the ante.

In contrast to the often bombastic "No Such Thing", "Dream Walk" is a much more spacious affair, beginning with an abstract pizzicato-piano conversation between Hwang and Forbes. Forbes’ gorgeous piano is the highlight of the first few minutes, employing a great use of dissonance in his chords as Drury's cymbals ring in the background. Eventually a motif, which serves as the separation point between each solo, is introduced by the violin and piano before the violin rises to the instrumental equivalent of a relentless scream and starts an intense solo.

Hwang plays viola on "WhenWhatCould", a tune which, like "Dream Walk" introduces itself with sparsity. The viola and bass combine with ominous bowed notes that transition into captivating languid interplay. After the pace picks up a bit, Forbes and Filiano introduce a strong driving set of notes which form the basis of the rhythmic theme of a large portion the composition and accompany part of another abrasive and thrilling Hwang solo. In the latter half of the track, after some quality hectic work by Filiano and Forbes, the song ends on a beautifully grim note, with mournful harmonies from the strings and trombone.

Similarly to the opener, the closer, “Inscribe”, wastes no time at all. The band immediately introduces the motif and springs into life with Filiano taking the lead with a forcefully bowed solo. Forbes, whose playing is often erratic in all the right ways throughout Sing House, comps combatively behind an unhinged trombone solo by Swell. Though the track, like the rest of this album, can be quite aggressive, it also has a surprisingly catchy section. In the seventh minute, the trombone steadily oscillates between two notes to back Forbes’ foreboding descending piano lines, briefly creating an unexpectedly hypnotic atmosphere.

With a title like Sing House, it is a bit ironic that the melodies here are quite knotty and don't stay around for long. Those who come to this record expecting it to "sing" in the conventional sense - have extended periods of singable melodies - may be left cold. However, this is a consistently engaging album - a listener looking for a quality avant-garde jazz record should not hesitate to give Sing House a play.