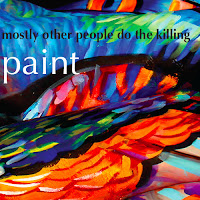 A few years back Pennsylvania based pianist Ron Stabinsky joined the Pennsylvania-philic Mostly Other People Do the Killing. Around the same time, long term member trumpeter Peter Evans left and the group began featuring expanded line-ups (though not all recorded) with musicians like guitarist Brandon Seabrook, trombonist David Taylor, slide trumpeter Steven Bernstein, and on occasion trumpeter Thomas Heberer. However, 2017's Paint signals the biggest shift yet - a stripped down piano trio version of the band.

And what a piano trio it is - band leader bassist Moppa Elliot and drummer Kevin Shea do more than a yeoman's job supporting Stabinsky's melodic and puckish playing. As expected, the song titles continue the long running tradition of name checking towns in PA, but they take it to a new level as each one is also a color name ... like paint I suppose.

The opener 'Yellow House' certainly kicks off with some bright blues. Small shifts in time and tempo keep the music from flowing too easily, reminding attentive listeners of the MOPDtK modus operandi, but they can be so subtle they could slip by the inattentive ones. For a band that has built its reputation on tweaking tradition by say recreating classic album covers, recording Kind of Blue note for note, and brilliantly picking apart slick 80s jazz, Paint is a fantastic evolution - or perhaps just an intriguing side trip.

We heard Stabinsky's unbridled talent on his recording Free for One, a delightful solo outing from 2016. On Paint he again brings the whole jazz vocabulary to bear, from blues riffs and avant-garde tonal cluster on 'Orangeville', to pure blissful harmony on the Duke Ellington tune 'Blue Goose'. The track 'Black Horse' is pretty damn perfect melodically, and its infectious drive showcases not only Stabinsky's virtuosity but Elliot's composition skills. The bass solo during the track is excellent as well - it's rather straightforward while drum and piano hits threaten to derail the tempo but also adds much to the vitality (a trick they pull on 'Blue Goose' as well, where tempos and pulse become at times disorienting). The closing track 'Whitehall' is a fun major key burlesque-like romp but with an unexpectedly sticky prog-rock middle passage.

MOPDtK trio edition is no less fascinating than its bigger versions. The trio format presents a more musically cohesive side of the group, but not without their sly and oft meta humor intact. If their history has proven anything, it's best to simply enjoy this slightly subversive take on the piano trio oeuvre, next time we hear from the band they will most likely be something all together different.
Paul on Wednesday, February 07, 2018
Share