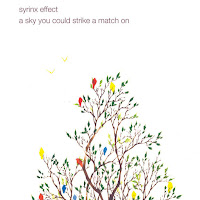 On Syrinx Effect’s first full length album, A Sky You Could Strike a Match On, the Seattle-based duo deftly explores the spaces between pop music and improvised music. Trombonist Naomi Siegel and soprano saxophonist Kate Olson skillfully play with gulf between the registers of their instruments, filling it with a universe of drums and looped samples. Though Siegel’s trombone is typically low, grounding the record with a consistent, melodic presence, the two don’t fall into the particular trap of “melody instrument” and “bass instrument.” This duo would rather play with passing melodies around a groove, using loops and beats to recontextualize the modern roles of trombone and saxophone, of melody and groove.

Siegel and Olsen have created a unique slice of experimental, instrumental “pop” music, and it’s clear that their compositions, sense of range, and sense of reference will continue to deepen and expand. Their charming EP Snail Songs from 2014 was a beautiful beginning to their more pre-composed work, but this record makes clear how deeply the duo has developed their arrangements, and strengthened their melodic sensibilities. With the help of producer and drummer Eric Eagle, this duo has polished their strong compositions for their most "studio" record yet.

A few standouts: The wonderfully orchestrated "Bankrobber Song" seems particularly dedicated to creating musical “worlds” for the listener to inhabit, juxtaposing chase music with chorale-ish moments of peace and a beautiful group improvisation at the end. Its equal and opposite, Super Soaker’s infectious beat gives Olson in particular a chance to stretch out, her soprano sax reverberant and uplifting over a lush choir of looped trombones and electro-acoustic effects.