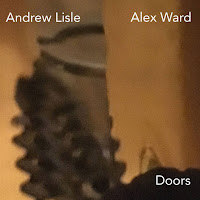 Doors is the new album from the duo of drummer Andrew Lisle & clarinetist/guitarist Alex Ward. Lisle has been based in London for the last few years, Portugal for a couple of years prior to that, and performs with many people including John Dikeman, Dirk Serries, and Colin Webster. Ward has been active for a few decades performing with a wide variety of musicians including Derek Bailey, Simon H. Fell, Duck Baker, Eugene Chadbourne, and countless others. In addition, Ward is also the leader/co-leader of many groups under his own name as well as groups like Predicate, Forbrace, and Dead Days Beyond Help. Ward is probably the more familiar of the two to readers of this blog as a quick search returns over twenty results.

Doors is comprised of four tracks, all between sixteen and eighteen minutes. “Front” and “Open” are clarinet and drums, “Back” and “Closed” are electric guitar and drums. Ward’s clarinet sound is delicious, at times warm and lush, at others severe and spikey, like a bear pleased with himself for stealing honey from a hive, only to discover he has a stomach filled with angry bees trying to get out. His guitar sound is equally complex, from lush single note runs to screaming, distorted madness. Lisle’s drums are equally expansive, crisp and clean when called for, aggressive and angry when necessary.

“Front” opens the album, quickly establishing the dynamic: two musicians, engaged in the endless battle of listening and pushing each other forward. The single note guitar lines of “Back” eventually give way to crashing chords before devolving in slashes for noise. Lisle’s playing reminds me of the French term for percussion “batterie” which always makes me think of the English homonym “battery,” defined by the US Department of Defense as a “tactical artillery unit.” Lisle reigns down the destruction much like the US Military unfortunately does around the world.

“Open” has Ward returning to the clarinet, playing in an almost traditional sounding manner (or as close as Ward comes to the tradition, which is still fairly far from what most would consider traditional) up until about half way through the track when the duo begins to explore moments of intense quiet. “Closed” ends the album with the further exploration of the guitar/percussion duo.

Doors is a wild ride, highly recommended for anyone interested in creative improvised music. Doors is available as a digital download or CD. In an ideal world, this would make for a beautiful double vinyl release, but we all know what that costs versus what sales are like for this kind of music.