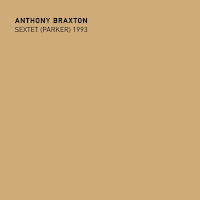 One of the first things I think about, with any archival release is, what’s the value? Not the financial value, but the cultural one. In other words, is something revealed or illuminated by this archival release? In some cases, the answer is absolutely yes. In others, it’s a bit mixed. When it comes to Anthony Braxton, whose output is nearly unmatched, a release like Sextet (Parker) 1993 inspires similar questions. Ignore them completely. This set is vital, its release long overdue, as it absolutely contains magnitudes.

Looking back on it, 1993 was in the midst of this period of just insane turnaround times, especially for Braxton releases on Leo Records. He produced a huge amount of music, already beginning the journey from collage-based system to the emergence of Ghost Trance Music. And in the midst of this evolution, arguably the most vital of his career—the space delineating pre-GTM and GTM—Braxton recorded over 11 hours of music by or recorded by Charlie Parker. In his liner notes, Stuart Broomer writes, of Eric Dolphy’s December 21, 1960, recording of both Ornette Coleman’s Free Jazz and his own Far Cry, “It was as if Dolphy had just passed through something.” There is, I think, a similar passing through for Braxton in these Parker sessions. (Broomer seems to agree, as he touches on these points and more in his extended liner-notes essay “Ways of Listening to Braxton’s Bird.”)

It is an interesting time for this release. Recorded 25 years ago, the sessions came 25 years into Braxton’s recording career. And here he was, on a much larger scale than his previous Monk and Tristano projects, going deep into a single artist’s song book with true depth, verve, and skepticism. Take, for example, the sax and piano duet recording of “April In Paris,” on disc 8. The whole disc is a barn-burner, a 15-minute “Hot House,” followed by a 16-minute “Another Hair-Do,” and a half-hour closing “An Oscar for Treadwell,” with an “A Night In Tunisia” interpolation. The first two tracks feature the quintet of Braxton, Paul Smoker on trumpet, Misha Mengelberg on piano, Joe Fonda on bass, and Pheeroan akLaff on drums; saxophonist Ari Brown joins the band for the massive closing track. And in the middle of all these absolutely top-notch performances, the duet plays like a high-wire act. Braxton and Mengelberg both shine brightly in their playing throughout the whole set, but this “April In Paris” truly sparkles. It’s expressive and dissonant, both of them unpacking 60 years of jazz history and turning a standard on its head, as both had done and would continue to do throughout their careers. It takes a special kind of reverence and forward-thinking to twist and turn a classic without thumbing your nose at it. The 20 seconds of rousing applause at the end confirms what a successful take this was.

My impressions, upon hearing the original 1993 Charlie Parker Project album, seem now mostly wrong. For one thing, I didn’t realize Han Bennink appeared on only one night of the tour, and that akLaff carried the band 6 of their 7 nights. Their styles are so unique and quite different. Of course, disc 7, the Zürich night with Bennink, sounds slightly more like an ICP meeting than the rest. And Fonda seems better paired with akLaff—cue up disc 9’s “Dewey Square,” where he’s accompanied by Mengelberg and akLaff for a sense of how effortlessly they glide together (more like Dolphy’s Byard/Carter/Haynes than Parker’s Jordan/Potter/Roach).

As with any archival release, most song titles recur multiple times (although a few appear only once or twice). Some return in a more or less similar fashion, while others are incomparable recordings. Take “Klactoveedsedstene,” which was performed 6 times, including a very successful version in Zürich with Bennink on drums. After 15 seconds of melody, Smoker guides the segue into the group’s longest take on their inside-out version. Bennink is phenomenal throughout, dynamic and cracking, switching over to brushes for a double-time swing section near the end, quintessential bebop. Likewise, the second take of “Koko,” closing out disc 10, swings like mad, with akLaff a bit looser here than on the earlier take, and Braxton opening up a bit more on his alto solo. Brown sits out, and maybe because there’s more space overall, Smoker also takes a slightly more expansive solo.

In short, yes this is a highly recommended release. But more than that, it’s recommended you really listen to it. Not just once or twice, but in all the ways possible. I have a playlist that’s organized by song title, so I can hear 2 “Cardboard”s followed by 2 “Charlie’s Wig”s followed by 3 “Confirmation”s. I have another that’s just my favorite tracks under 10 minutes. Find a way in, and the set has reward after reward. In that way, it’s the best kind of archival release, one that feels sufficiently, and consistently, new.

Incredible review of this set Lee. Bravo ! This is a must have. Thank you for what you have written.