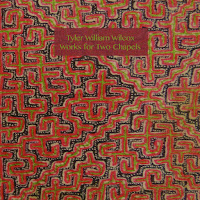 “But it was impossible to see too much. The less there was to see, the harder he looked, the more he saw. This was the point. To see what’s here, finally to look and to know you’re looking, to feel time passing, to be alive to what is happening in the smallest registers of motion.”
—Don DeLillo, Point Omega


When I first listened to Tyler Wilcox’s Works for Two Chapels, I was reading Don DeLillo’s spare, late, novel, Point Omega. Its opening section is narrated by a man who becomes obsessed watching Douglas Gordon’s 24 Hour Psycho, which is projected onto a free-standing translucent screen, at two frames per second, in a small room in the MOMA. These three works of minimalist art, therefore, began to speak to each other about each other while I watched, read, and listened.

Each of these artists “sculpts time” within a specific space: a chapel, a gallery, a novel—all of which also exist in consciousness. Things that might escape the usual habits of our natural attitude take on heightened significance: textures of silence and human noise surrounding notes of music, the turn of a head, or a gesture of the hand. What is, and how we apprehend and think what is, alters as the pace slows. By alienating us from what we normally misperceive as “normal,” we begin to think what rarely gets thought.

Tyler Wilcox’s Works for Two Chapels has two tracks: the twenty-minute “Octet (for four trombones and string quartet)” and the twenty-three-minute “9.11.13.” The “Octet” is played in the Church of the Annunciation, Brooklyn, New York, by the Guidonian Hand Trombone Quartet (Mark Broshinsky, William Long, James Rogers, and Sebastien Vera) and the Ensemble Indexical (Rachel Golub and Mario Gotoh, violins, Victor Lowrie, viola, and John Popham, cello). “9.11.13” is played by Tyler Wilcox on the pipe organ in the Chapel of the Holy Innocents at Bard College, Annandale on Hudson NY. Developed as part of The Music for Contemplation series (https://www.mufoco.info/), Wilcox’s pieces contain a sustained note, or notes, whose attack and duration is determined by each player, each time. If one feels the need for an orienting comparison, the pieces fall somewhere between John Cage’s “4’33” and drone played on classical instruments. Uncredited players include those who, during the duration of the performance, contribute a variety of noises as integral as the playing—those who coughed, shifted their chairs, honked their horns, revved their car or bus engines, sounded storm alerts, and generally made the sorts of racket people are wont to make in the everyday course of life.

In the “Octet,” the sustained moments of silence of the musicians (amidst the noise of the world), begins to affect how we experience time. The music is suspended in time, time is suspended by the music, and it all takes on an element of nearly Hitchcockian suspense. The music is dense, then sparse, then absent, then, like the sun, it rises into harmony again. It is meditative, drifty, conceptual, abstract, and it is unwilling to assert an interpretation or reach a conclusion. While it is “music for contemplation,” contemplation does not necessarily imply something “peaceful.” This might be music nearly at a standstill, or composition of extended duration and subtle variation—a music of stasis—but besides implying stability, inactivity, or equilibrium, “stasis” always necessarily includes strife, for that momentary state of balance is achieved between forces equally opposed. Thus, buried deep in the archeology of this word στᾰ́σῐς is the memory of weighing, or the stance of a boxer, the position of a litigant, a dialectical argument of a philosopher, a seditious political faction, social division, radical dissent, a good party, and even a band. Within stillness, there is important motion.

Wilcox’s music is challenging because it creates a space within time to reveal consciousness. There is not much happening on the surface. What happens is internal, subterranean, at the level of thinking where thinking is unsure how to think in an age adrift in uncertainty, catastrophic terror, tragedy, danger, and rage.

In Point Omega, DeLillo writes, “It takes close attention to see what is happening in front of you. It takes work, pious effort, to see what you are looking at.” His characters are “mesmerized by this, the depths that were possible in the slowing of motion, the things to see, the depths of things so easy to miss in the shallow habit of seeing.” His novel, Gordon’s achingly slow rendition of Hitchcock’s film, and Wilcox’s music invite us to hear, see, and think about the phenomena of time, motion, and sound in ways that our conventional, workaday, manner misses. Listening to Wilcox reminds me most often of the moment in Point Omega where the characters stare across what seems like an infinite expanse of California desert—a place where nothing is—while talking and contemplating: “We sat out late, scotch for both of us, bottle on the deck and stars in clusters. Elster watched the sky, everything that came before, he said, there to see and map and think about.”

This is art about “time that precedes us and survives us.” It is worth your time.

Please listen to Works for Two Chapels, and purchase it here:


For other information about Tyler Wilcox and the Music for Contemplation Series see: