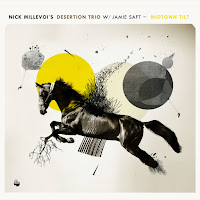 Guitarist Nick Millevoi has for some reason dropped his name off his most recent release - the last time we heard the group in 2016, the group was named after himself and title was Desertion, now the group is 'Desertion Trio' but with a prominent call out to band member Jamie Saft. So, what's in a name? I don't really know, but I can say what's in the music has not suffered! On Midtown Tilt,  Millevoi's keen awareness of space, propulsive energy, and strong rock sensibility are front and center.

Just for the record, the trio is Nick Millevoi on guitar, Johnny DeBlase on electric bass, Kevin Shea on drums, and Jamie Saft on Hammond organ. The group is a bit more rock oriented than on the previous record, which featured Ches Smith on drums and DeBlase on acoustic bass.

When I hear Millevoi, I think of Bill Frisell circa This Land. Not literally, heck, it hardly sounds like that, but rather in spirit. There is the imbued sense of possibility and well, desolation, along with a hint of rough-hewn self-reliance, found in their wind swept musical landscapes. On the first song, the title track, the organ pushes the song along like a steam driven plough, forcing up as well of sound with a back beat urgency. The relentless push is harnessed by Millevoi's slightly distorted guitar that ushers the song to a climax. And in keeping with the windswept landscape metaphor, the track 'Numbers Maker' has a bit of the Morricone surf/spaghetti western sound, though tempered by a slightly menacing flavoring from the organ. An unusual splattering of dissonant melodic intervals and chord fragments keeps the song from fitting any mold entirely.

Throughout the album there is a somewhat gritty, psychedelic atmosphere, mostly created by the Goliath sounding organ, and certainly aided by the powerful guitar, bass, and drum trio. A track like 'The Carideon' is a perfect blend of the mystical atmosphere of the organ and the hard charging improvised rock. In fact, they reach an absolutely mesmerizing peak within the six short minutes of the track.

There is much to recommend here, so just to pull some somewhat random associations: if you're drawn to groups like Elephant9, Raoul Bjorkenheim's Scorch Trio or, going back a bit, Sonny Sharrock's Ask the Ages and Tony Williams' Emergency with John McLaughlin, you'll find yourself in good company with Desertion Trio.