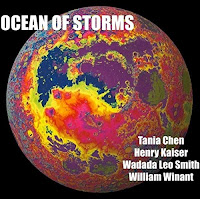 Even if we cannot review every album by every musician or band, some artists require a more completist approach if only because every album holds surprises. In the last year, we reviewed the following albums by or with Wadada Leo Smith: "Aspiration" with Natsuki Tamura, Satoko Fujii and Ikue Mori, "Najwa", his solo album "Reflections on Monk", "Araminta" by the Harriet Tubman ensemble, and "Nessuno" with Pauline Oliveros and Roscoe Mitchell and John Tilbury. Readers who have followed our recommendations will have noticed the musical and stylistic differences between all these albums, yet Smith feels equally at ease in all these environments, whether avant-garde jazz, free improvisation or funky Miles Davis explorations.

Oceans of Storms was still missing. Well, here it is. And the concept is again totally different. The musicians are Tania Chen on piano, Henry Kaiser on acoustic guitar, acoustic harp guitar and electric guitar, and William Winant on percussion. The four musicians recorded the improvisation during a one day collaboration in the recording studio. Only three tracks are performed by the entire band. Two tracks are duets, one between Smith and Chen, and one between Kaiser and Winant.

Initially, the music is very open-textured, with low density and lots of silence. Even in the quartet tracks, the calm and intense atmosphere oscillates between the meditative and the eery. It is dreamlike, especially in the second track when Chen plays bluesy phrases, with chime-like sounds from Winant and Wadada's moaning trumpet. The duo between Chen and Smith is one of the highlights because of its incredible purity of sound. The duo between Kaiser's baritone guitar and Winant's percussion shifts the album's fluidity into more granular and harsher landscape. The soaring resonance has been changed into half-muted shorter bursts of sound. On the last track, Kaiser switches to electric guitar, and the mood becomes darker and full of despair. It's a strange transition, making the entire album shift from an airy breezy meditative atmosphere to one of airless doom.

Again, for the Wadada Leo Smith fan, this is a must-have album.

All track titles (Bay of Honor, Sea of Crisis, Lake of Time, Montes Spitzbergen and Al-Kwarizimi) refer to locations on the moon: lakes, mountain ranges or craters. Somehow they missed the "Sea of William Henry Smyth", which would have been fun to add, but then again, it would have left out Chen.