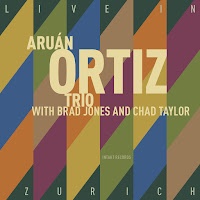 At least in my eyes, Aruán Ortiz has been something of an underrated figure in the world of improvisational jazz. While both his quartet recordings and his work with Esperanza Spalding garnered mainstream accolades from the likes of DownBeat and JazzWise, his more recent trio (Hidden Voices) and solo (Cub(an)ism) efforts seem to push a little bit too far to sit comfortably with the “modern jazz” most often heralded by those aforementioned rags. Nevertheless, it is on these latter recordings (not to mention Michaël Attias' stellar 2017 effort Nerve Dance) that the Cuban-born Ortiz has begun to stretch out and integrate the dynamic rhythms of his birth home with stranger, looser, and more spacious sounds. On this latest release from Intakt, recorded live at Zürich’s unerhört!-Festival in 2016, Ortiz unveils his newest trio - Brad Jones on bass and Chad Taylor on drums and mbira. This concert focuses on material from Ortiz’s last trio album, Hidden Voices. In this live setting, those relatively compact compositions are extended, deconstructed, and envisioned anew. Just like the Cubism that Ortiz frequently alludes to in his album titles (Cub(an)ism, Cuban Cubism), Ortiz’s newest trio have taken those pieces and considered them from fresh angles. As a result, Ortiz has made the strongest case yet for his improvisational prowess. At the same time, Live in Zurich seems to be the farthest that Ortiz has moved from the cooler and more restrained music that he unleashed on albums like Orbiting and Alameda.

Right off the bat, “Analytical Symmetry” draws you into a world of abstraction; Taylor’s warm mbira tones are the first thing to appear, followed by Ortiz’s hesitant piano string manipulations. Eventually, Jones’ bass rises out of the murk, and things start to coalesce. The trio is patient, however; there is no race to settle on a rhythm or even a central melody. These first few minutes are all about establishing a sense of space, weaving textures and timbres together into an overarching (yet nebulous) mood. By introducing the piece in such a roundabout manner, its sudden explosion into bright strands of rhythm is made even more effective. Ortiz has a way of producing jagged melodic lines that, despite their frenetic, wild energy, remain eminently danceable and fun. At 34 minutes, however, such a sustained attack would undoubtedly wear on both the performers and the listeners. Thus, in keeping with the version of “Analytical Symmetry” originally released on Hidden Voices, the trio often dips into contemplative silences. Taylor and Jones drop out, leaving Ortiz to offer up laconic sketches and Impressionistic whorls. He might veer into higher tempos on occasion, but there is always the distinct sense that he is keeping his foot on the proverbial brake. When Taylor and Jones do return, they do so with a metronomically regular pulse that only occasionally mutates into slightly more complex shapes. Meanwhile, over this throbbing current, Ortiz splashes notes and sends them frothing off in numerous directions at once. It’s all in the service of release; just when the pressure can’t be sustained much longer, with Taylor and Jones pushing hard against the rigid pattern they’ve set for themselves, that release comes: the main melody barrels through, Jones in particular taking the opportunity to meet the piano note-for-note, his low-end explorations providing a nice counterpoint to the vibrant streaks sent off by Ortiz. After this dazzling coda, the trio immediately moves into another composition from Hidden Voices, the appropriately-named “Fractal Sketches.” After the peaks and valleys of “Analytical Symmetry,” it feels like something of a whirlwind. Even the “quieter” moments are busy, Taylor offering up endless frills and stop-start progressions, while Jones carves out his own intricate patterns beneath Ortiz’s ever-winding melodic turns.

The second track on the set opens with an immersive bass improvisation from Jones. His evocative wanderings set the tone perfectly for Ortiz’s jaunty take on Chopin’s “Étude #6, Op. 10.” It’s a rather straightforward take, at least until the trio decides to upend things a bit in the piece’s latter half - Ortiz transitions to a more percussive, repetitive, and adventurous mode, while Taylor drops his even-keeled placidity for a looser and more wide-ranging attack. From this wild and woolly reinterpretation of Chopin, we move to Ortiz’s hyperactive arrangement of Ornette Coleman’s “Open or Close” and “The Sphinx.” It serves as a quick shot of adrenaline, but it’s followed by the glacial, narcotized “Alone Together.” Here, the trio returns to a more textural palette; in particular, Jones bows out a series of baleful notes that cast a pall over Ortiz’s skeletal figures and Taylor’s icy patter.

On Live in Zurich, Ortiz and his trio show themselves to be in command of a variety of approaches and modes. There’s frenzied improvisation, tasteful melodicism, and lots in-between. For seekers of contemporary jazz that’s catchy, rhythmic, and often intoxicatingly angular, look no further.