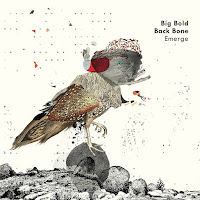 By Derek Stone
Last year, Big Bold Back Bone released the perplexing and astonishing In Search of the Emerging Species. In that recording, the quartet scraped away the melodic and tonal associations of their respective instruments, often with unrecognizable results - Marco von Orelli’s trumpet became a sputtering tubule, a brassy extension of the lungs. Sheldon Suter’s prepared drums were a degraded pulse. Luis Lopes’s electric guitar crackled and fizzed. Travassos applied electronic noise in subtle strokes. That album revealed a group that was eager to tap into the raw physicality of the instrumentation they possessed; trumpets, guitars, drums, and analog electronics became alien artifacts that the players seemed to approach with equal parts curiosity and hesitation.
Emerge, the group’s newest outing, finds them taking a similar, if more expansive, approach. One of the biggest changes lies in the presentation itself; instead of releasing one long track, they have split the album into several shorter ones. In Search of the Emerging Species (and it’s single track “Immerge”) was definitely not the most varied outing - nor did it need to be. With Emerge, on the other hand, the group have wisely decided to take a different approach, with the result that now they have given themselves the freedom to draw from different tonal palettes. While “Immerge” was a long-form exploration, with all the detours and circular movements that that implies, Emerge seems to be driven along by a more narrative flow.
As before, the players often seem to treat their instruments as bodily appendices, to be manipulated, fumbled with, and, at times, forced into odd contortions and tonal shapes. There are some surprises this time around, however. On “Tidings,” for instance, over an ominous wash of electronic scrapes and muffled percussion, von Orelli undertakes a brisk bebop solo. It’s jarring, like finding some decayed trace of human culture (a statue overgrown with moss, perhaps) in an otherwise barren wasteland. On the final piece, “Ground Found,” he takes a similar tack, darting minnow-like through the clouds of ink stirred up by Suter’s thunderous percussion, Lopes’s siren calls, and Travassos’s muted whirls.
On other pieces, Big Bold Back Bone embrace the throbbing and minimal physicality that they utilized so well on their first release. “Silent Stream,” the opener, stays true to its title. Beneath von Orelli’s searching lines, Travassos’s electronics and Lopes’s guitar churn together, a pitch-black morass. “Sealust” cuts through this frothing mix of tones and textures and allows for the individual elements to be better discerned: Suter’s arrhythmic and clattering percussion, for instance, sounds like seashells being strewn along a rocky shore, while Von Orelli avoids full-throated phrasings entirely, opting instead for quiet gasps and spurts.
Compared to the quiet intensity of the aforementioned pieces, the brief “Tentaculita” sounds absolutely gargantuan. Jagged shards of guitar and nervy, stop-start percussion propel the track forward; Travassos’s electronics shift tectonically underneath, while von Orelli veers between caustic expulsions and jittery cries. If the other pieces on Emerge came from trenches and geysers, “Tentaculita” is the sound of approaching the surface - predators and prey locked in a brutish dance. In its wake, “Mergulhador” (Portuguese for “diver”) is almost sublime. Lopes takes on a more skeletal and laconic approach, allowing Suter to fill up the empty space with loose clacks and peals that, despite how sparse they are, conjure up a great deal of tension. Von Orelli, meanwhile, offers up lines that are (for this recording, anyway) uncharacteristically melodious - they bob along in buoyant repose, belying the immense pressures underneath.
Emerge is sure to entrance fans of Big Bold Back Bone’s previous album, and it’s likely to win new fans as well. While it is by no means a turn towards accessibility, it is more digestible - perhaps due to the choice by the band to tackle shorter, more concise movements. Despite these “bite-sized” pieces, however, there is a sense of cohesion underlying the individual tracks, along with a sensation that you are being propelled forward by some ineluctable current. At the end, you may not feel that you’ve reached any destination at all - but you’re likely to find that the ride was well worth it.