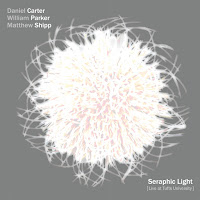 Brilliant. Majestic. Grand. Beautiful. The words that critics are taught to shun. Why? Because they're suggestive, personal, without content. So be it. This album is brilliant, majestic, grand and beautiful. It is a performance by some of the leading voices of free jazz. We all know Daniel Carter, William Parker and Matthew Shipp. They need no introduction. Yet here, somehow, despite their huge catalogue of great music, they still kind of surpass themselves.

Daniel Carter is underrated. His lyricism and versatility on flute, sax and trumpet have been lauded before on this blog, yet somehow he takes it a step further here, with deep and warm tones, soaring solos, with shimmering and sensitive vibratoes. His sound also resonates in the space of the concert hall, with the piano and the bass more present at the front, creating an eery and floating atmosphere. His core instrument is the sax, but his more sparse use of flute and trumpet are equally stunning, not by the technical skill, but by the tone and space they use.

Shipp moves magesterially from the basic bluesy roots to the most complex avant-garde explorations within the same movement, rhythmic, lyrical and expressive. He knows when to pause, when to let the others take the front stage, when to create these wonderful harmonics for Daniel Carter to solo on. Shipp enjoys it. You can hear it with every note he plays, and especially in the bluesy second track, enjoying both the heritage, the sound and the possibilities for playful diversions into newer possibilities.

And Parker is always good. Rock solid in his rhythms, eloquent when bowing, a wonderful listener and team player. Mostly plucking his bass, his role is less prominent, yet robust, keeping the sound of Carter and Shipp together, making it even more cohesive.

And what they do is exceptional. It somehow all fits together, as if it's a well-studied suite, as one collective improvisation or even composition without soloing in the traditional sense, of shifting themes within the same concept, of changing moods within a single musical vision, of changing jazz genres within the same improvisation. This is music that mourns, weeps, sings, dances and jubilates at the same time. The first two tracks are separated on the album, yet in reality they form one single improvisation. In some improvisations and live performances, there are always moments when you sense that the musicians are trying to find a common ground, when there are slight hesitations about which way to go, but not here: all three musicians improvise as if they know the music by heart, as if it's always been there, agreed upon, rehearsed, and they don't need to invest their energy in how to move next, no, the entire weight of their effort relies on how to deliver, how to make it sound more sensitive, more powerful, more beautiful.

Apart from the fact that they know each other so well, and have performed together for over thirty years in a multitude of ensembles, one additional reason for this concert's success may be its sequence in a full evening at Tuft's University a year ago. The evening was organised by visual artist Kurt Ralske, also improvising musician and professor of digital media, film and sound at the University, on the topic of “Art, Race, and Politics in America”, featuring a film screening, a discussion with the musicians, and a concert, with participation from students and faculty from various parts of the university.


As the liner note mention: "Thus on the evening of April 5, 2017, the audience attending Tuft’s concert hall enjoyed an unusual three-part hybrid-format program. First we watched the 1959 documentary film, The Cry of Jazz, written and directed by Edward O. Bland, with the participation of Sun Ra. The film asserts “jazz is the Negro’s cry of joy and suffering” and “the Negro is [white America’s] conscience...if they have a conscience.” These bold and timely ideas pushed forward the second portion of the program, a discussion / Q&A with Daniel Carter, William Parker, and Matthew Shipp. For 45 free-flowing minutes, the men spoke truths, told stories, floated ideas, countered assertions, listened to questions, gave advice, told jokes, and laughed together." Then they started making music.