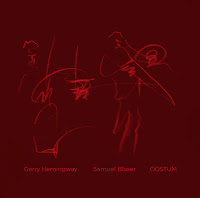 Since the early days of this blog, more than 11 years ago, we have reviewed only three trombone and drums duo albums. Indeed, the number of albums are rare with this line-up. And now we have this great duet between two masters of their instrument, Gerry Hemingway on drums and Samuel Blaser on trombone. This is not the first duo recording with a percussionist for Blaser, who released "Vol à Voile" with his compatriot Pierre Favre in 2010.

The performance was recorded live three years ago, in the Kerkje van Oostum, in Groningen in the Netherlands, one venue of the bicycle tour summer jazz festival. The little church originally dates from the 13th Century.

The opening track is surprisingly calm, as if both musicians are measuring the space in which they perform, and barely a whisper leaves their instruments, hesitating and sensitive to explore the environs, a kind of welcoming minimal disruption of what already is. Hemingway starts the second track with more gusto, creating a rhythmic foundation for more voiced and lyrical playing. Yet interestingly, they open things up again on the third track. A bluesy solo by Blaser expands with timbral and multiphonic explorations.  Hemingway joins with first implicit, then clearer rhythmic patterns, turning the sad beginning into a more playful and almost funky interaction with the horn.

They keep changing the approach, changing the expectations between lyrical interplay and sonic explorations, between raw free improv and jazzy soloing, including even atmospheric and solemn singing in a dialogue with vulnerable trombone sounds. They change between sad and joyful moods, between calm moments and they end with a great and intense powerful finale.

It is a real joy to hear these two musicians interact. The music is fresh, rich and a little like a crackling fire, vivid and moving, yet at the same time soothing and inviting to dream.