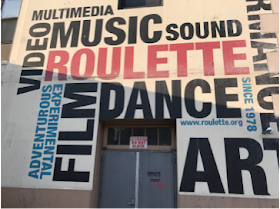 The final evening of the Vision Festival arrived. It was a bittersweet moment - memories of the past week of shows still lingered sweetly in the mind, but expectations were high for the stellar line up which included the highly anticipated New World Pygmies with Jemeel Moondoc, William Parker, and Hamid Drake and the Oliver Lake Big Band.

First up was trumpeter Jaimie Branch with her group Fly or Die. Branch’s debut album with this group rose to the top of many critic’s end of year best of lists, and it’s no wonder why. Branch mixes avant-garde tendencies with strong grooves and catchy bass lines. Her melodies are straight forward and she cuts through all clutter with a strong and assertive tone. However, she also knows when to hold 'em and allows the exploratory passages to make the the head-bopping parts even more tense and exciting. The group here was different than the album, so along with Branch and drummer Chad Taylor was bassist Anton Hatwitch and cellist Lester St. Louis. Taylor adds something truly special to the group, his kit was power and precise on the ‘themes’ and his small percussion items made unusual textures during the explorations. What stroke us about Branch was that we felt like we heard a channeling of Miles Davis’ 70 era music in the sense of recognizable themes appearing with sudden clarity amidst abstractions and swampy meanderings. This was a superb start to the final evenings music.

Next up was Cooper-Moore’s solo program A Mourning Dove’s Call, an improvisation dedicated to Martha and Guthrie Ashton, which was accompanied by paintings of women by Kim Winkler. Cooper-Moore’s music was like the festival in a nutshell. He used ragtime and stride piano motives, combined them with folk songs and minor and seventh chords á la Keith Jarrett just to put them through the grinder playing Cecil Taylor clusters - a set that was very emotional and varied.

Also, the festival’s focus on women’s rights and spoken words was continued on the last day by a performance of Julie Ezelle Patton (poetry, visual art), Nasheet Waits (drums), Ken Filiano (bass) and Paul Van Curen (guitar). Everything in this set - the music and the poetry - was improvised with "the music chasing the words and the words chasing the music in overlapping spirals of sound", as Patton puts it. Especially the music was very subtle with Van Curen’s guitar being reminiscent of Universal Congress Of’s Joe Baiza.

Then, New World Pygmies, the trio consisting of Jemeel Moondoc (alto sax), William Parker (bass), Hamid Drake (dr) were scheduled. According to Moondoc the project is an overture of an old world culture, surviving and blossoming as a new world influence. Once again, one of the main aspect of the festival was picked up on. For Moondoc the question is, if "old" is "new", is "ancient" "modern"? The trio's mission is to "bop old and new dreams to the thrust of an avant-garde allegro moving past Saturn and a moon glow forever existing" and to remember Cecil Taylor, whose music has been a huge influence for all of them. Moondoc is still a very powerful saxophonist, he interspersed blues riffs, bebop lines and African melodies. Most of the set was freely improvised, but the trio also used composed material by him. However, the set remained deeply rooted in a classic free jazz context, so it leaned toward the "old" rather than "new", but regardless, it sounded wonderful and was warmly welcomed by the audience.


The last band of the festival was the Oliver Lake Big Band consisting of Lake himself, Bruce Williams, James Stewart, Alex Harding, Darius Jones, and Mike Lee on saxes, Adam O’Farrell, Freddie Hendrix, Nabate Isles and Greg Glassman on trumpets, Aaron Johnson, Al Patterson, Terry Greene II and Robert Stringer on trombones, Yoici Uzeki on piano, Robert Sabin on bass and Chris Beck on drums. Lake’s compositions are influenced by Oliver Nelson and Duke Ellington, he takes a hint from both arrangers and creates vast colorings with the horns, which in turn he utilizes in compositions that draw on his avant-garde style. The result is music that also echoes the large ensembles by Charles Mingus, Gil Evans and Kenny Wheeler. Lake presented three new compositions and particularly “Say What“ stood out, with its very well organized chaos in which the solos collided and entwined. Lake wanted to play more songs but the strict timeline of the festival prohibited it. Nevertheless, it was a grand finale worthwhile of a very good festival.