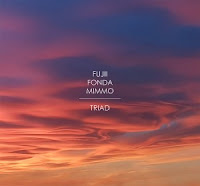 The precursor to Triad, Satoko Fujii and Joe Fonda’s dazzling Duet, was one of 2016’s most delightful records and the first encounter of these two greats. Arriving from opposite sides of the free jazz/improv spectrum—one from the forefront of avant-jazz and free improvisation that flirts with modern composition, the other from the fiery spheres of “traditional” free jazz—Fujii and Fonda immediately clicked, achieving a symbiosis of styles, and crafted an inspired piece of music. For their second album together, they’re joined by Italian soprano saxophonist Gianni Mimmo, a prolific, creative musician who runs Amirani Records and whose output should also be familiar to anyone following the label Setola Di Maiale.

Much like the whole record, Triad’s opening “Available Gravity” is an idiosyncratic improvised cut, uncharacteristic for its performers. It reads as an abstract retelling of haunting and haunted folklore delivered through the voices of Joe Fonda’s romantic wooden flute, the tinkling knocks of Satoko Fujii’s piano strings, and the grating flutter of Gianni Mimmo’s saxophone splurts. This beautifully subdued track, along with three other shorts “Accidental Partner”, “No More Bugs”, and “Joe Melts the Water Boiler”, serves as a comforting satellite for the forty minutes long centerpiece “Birthday Girl”. Performed and recorded in Milan on Satoko Fujji’s 59th birthday, “Birthday Girl” is Triad’s focal point, an enthralling, oft exhilarating tour de force and celebration of improvisation.

While the piece starts calmly, almost carelessly, it soon picks up pace as Fonda’s forceful and playful double bass plucks are accompanied by Fujii’s characteristic forte playing and incisiveness. In a space between them, Mimmo’s saxophone draws lyrical lines interrupted only by the occasional discordant, energetic blow. Throughout, the musicians play in unison rather than against each other, exchanging ideas, evolving them individually, and reconciling them collectively. There’s a wonderful recurring circularity in the way that Fonda, Fujii, and Mimmo fervently repeat notes, imparting more heaviness and resolve in each cycle, whilst also creating an overarching structure. Their individual styles remain recognizable, yet also strain and contort to accomodate this new and unexplored context.

Elsewhere in the track, the trio entertains an accelerating, rhythmical, and oriental-sounding passage that leads into the first of several Fujii’s explosive solos. The solo is disrupted when Mimmo starts screeching and spouting furious lines, betraying the lyricism that came before. Soon Fujii reaches for the insides of her (possibly prepared) piano and the improvisation morphs into a faux chamber piece. Along the way, as the trio shifts in and out of configurations, one of Mimmo’s solos is rendered especially compelling by a sustained tone that gets out of control, while during a charged and wild duet with Fujii, Fonda can be heard shouting out an impassioned “yeah”.

As the song comes to a close, the musicians find themselves in a delicate post-bop section, brimming with emotion, led by Fonda’s galloping bass, Fujii’s tasteful piano accents, and Mimmo’s elongated, tuneful sounds. The players’ approaches warp again as the album closes in a fervent crescendo with Fujii and Mimmo playing faster and harder yet remaining faithful to a certain intermittent musicality.

Gianni Mimmo recorded for Setola di Maiale too, but he runs Amirani Records
www.amiranirecords.com
could you please correct this?
Thanks for your attention
Gianni

Apologies for the oversight and thanks for the heads-up. It has been amended.